Medians and midpoints in a triangle

Triangles have several points that could be called centres. In this chapter we discuss the orthocentre, incentre, circumcentre and centroid.

If we wished to divide a triangle into two regions of equal area, we could do this by drawing a line that passes through a vertex and the midpoint of the opposite side. Such a line is called a median. 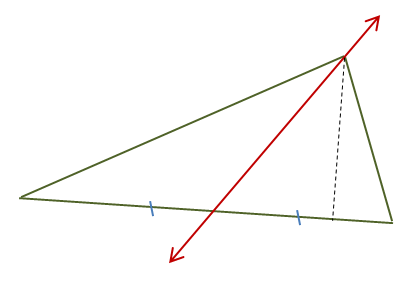 In the diagram, the red line is a median. The two half-triangles formed by the median have the same area because they have the same height and the same base.

If another median is inserted, it intersects the first. The point of intersection is called the centroid. At the centroid, the mass of a triangle made of some uniform solid material would be balanced across lines pointing in two different directions and so the centre of gravity must be at this point.

In the diagram below, a triangle with two medians is drawn with a line passing through the remaining vertex and the centroid. We show, by a similar triangles argument, that this line is also a median. The symbol '$\sim$~' will be used to indicate similarity. 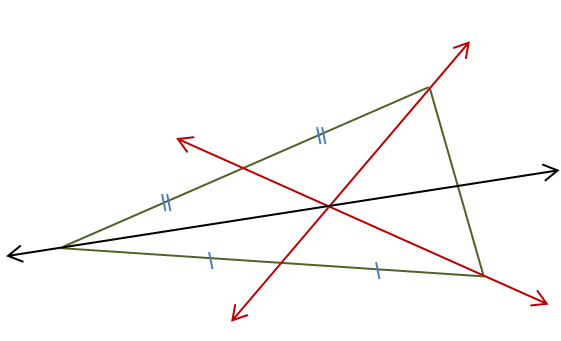 We begin by constructing the line segment $ED$ED, as in the following diagram. 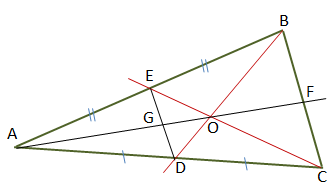 Since they have the same angles, $\triangle AEG\sim\triangle ABF$△AEG~△ABF  and since $AB=2AE$AB=2AE, it follows that

We can make a further deduction concerning the centroid. We have already seen that $\triangle OEG\sim\triangle OFC$△OEG~△OFC with $FC=2EG$FC=2EG. It follows that $CO=2OE$CO=2OE  and the centroid divides the median $EC$EC in the ratio $1:2$1:2. There is nothing special about this particular median: the same reasoning could be applied to each of the others.

So, we conclude that the centroid divides the medians in the ratio $1:2$1:2 in all cases.

A height of a triangle is the perpendicular distance from a vertex to the opposite side. The line drawn through a vertex so that it is perpendicular to the side opposite the vertex is called an altitude. It extends beyond the triangle in both directions. There are three altitudes (and three heights) in any triangle. Any two altitudes must intersect and, in fact, all three altitudes intersect at the same point, which we prove below. 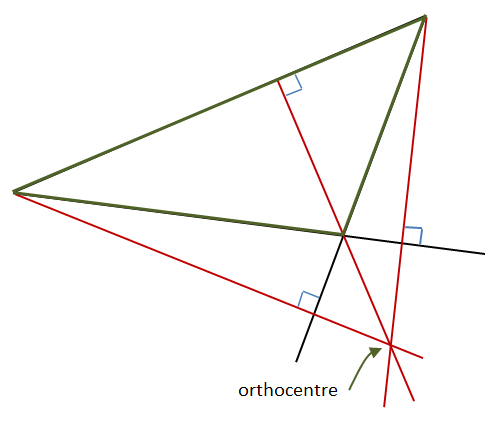 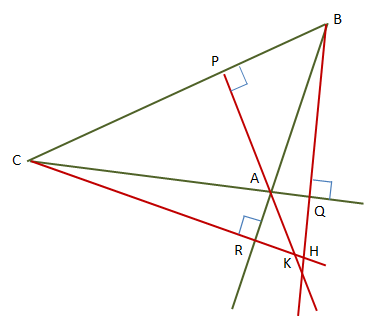 In a similar way, we deduce that

(Both are similar to $\triangle BHR$△BHR.)

In the diagram below, the perpendicular bisectors of $AB$AB and $AC$AC intersect at $O$O. By congruent triangles, it is clear that $OB=OA=OC$OB=OA=OC. So, these three line segments are radii of a circle with centre $O$O which passes through the vertices $A$A, $B$B and $C$C.

Since the sides of the triangle are chords of the circle, their perpendicular bisectors pass through the centre of the circle. 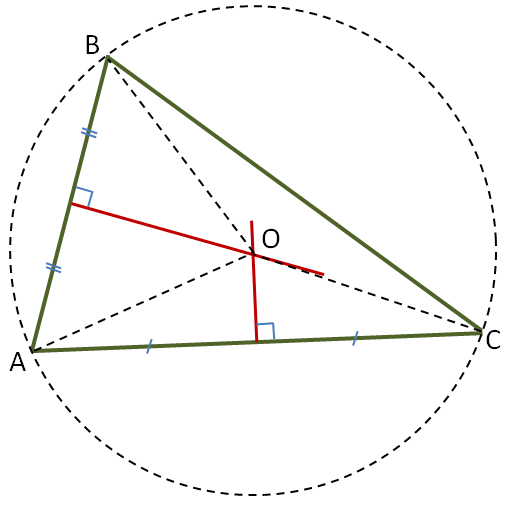 Thus, we can state: The perpendicular bisectors of the sides of a triangle are concurrent at the circumcentre. 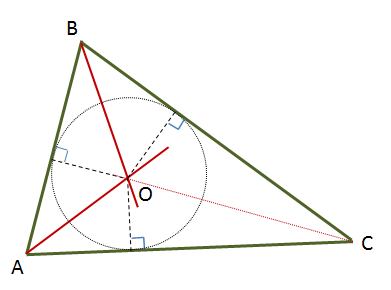 The bisectors of angles $A$A and $B$B of the triangle intersect at $O$O. By congruent triangles, we see that the perpendiculars from $O$O to the sides of the triangle are equal in length. Therefore, they are radii of a circle with centre $O$O that is inscribed in the triangle.

The sides of the triangle are tangent to this circle since they are perpendicular to the respective radii. Therefore, again by congruent triangles, it is clear that line $CO$CO bisects angle $C$C. This establishes the theorem: The angle bisectors of a triangle are concurrent at the incentre.

Determine, through investigation, some characteristics and properties of geometric figures