Name sides and angles in a right-angled triangle

We have already seen which of the sides in a right-angled triangle is the hypotenuse.

If we have another angle indicated (like $\theta$θ in the diagram below) then we can also label the other two sides with two special names.

Adjacent Side - is the name given to the side adjacent (next to) the angle in question. 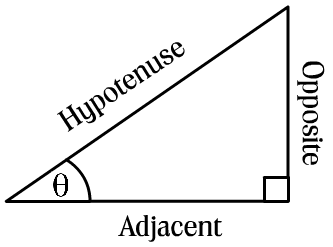 Have a look at these triangles that I have named below.  Note how the sides adjacent, opposite and hypotenuse are also abbreviated to A, O and H.

Let's have a look at these worked examples.

Which of the following is the opposite side to angle $\theta$θ?

Which of the following is the adjacent side to angle $\theta$θ?

A driver glances up at the top of a building.