In the sciences, and particularly in the biological sciences, researchers examine data to see whether values of one variable are related to values of another variable.

We speak of an explanatory or treatment variable and a corresponding response variable.

When data consisting of pairs of numbers (values of the treatment and response variables) are displayed in a scatterplot with the help of a spreadsheet program or other software, the program can be asked to find the line of best fit or regression line. The program finds the formula for the regression line and it also calculates what is called an $R^2$R2-number that indicates the strength of the linear association between the two variables.

Data pairs are shown in the columns on the left. These are plotted and the regression line, its formula and the $R^2$R2-number are provided. 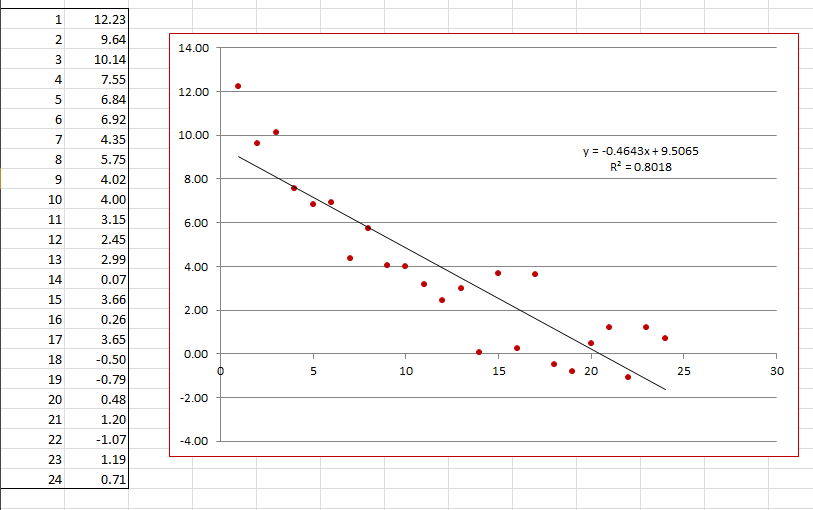 An association between two variables does not imply a causal relationship.

Without further evidence, we are not able to say that the explanatory or treatment variable causes the variation in the response variable. It may be that both variables are changing in response to some other hidden factor.

The term biometric data is used by businesses dealing with security to mean measurements of facial features, fingerprints, iris colour and pattern, and any other characteristics of a person relating to their identity.

The term is also used by the fitness industry when referring to a person's capacity in physical activities.

More broadly, biometric data concerns the application of mathematical or statistical theory to any measurements in biology, human or otherwise. Thus, biometric data appears in the biological sciences which include medical, veterinary and agricultural science.

There are many variables of the numerical kind that you could choose to study. Here are a few:

Some of these would need specialised techniques and measuring equipment for their collection but others could be studied more conveniently. You should add to this list if necessary and choose variables that are of interest to you.