Consider a statistical experiment in which it is assumed that the values taken by a variable that is being studied depend on values taken by an independent variable. Suppose a number of trials of the experiment have been carried out. We would feel justified in making predictions about what will occur in further trials provided the independent variable takes values that are within the range of values already tested. Such predictions are called interpolations.

Displayed graphically, with a linear trend-line inserted, we have: 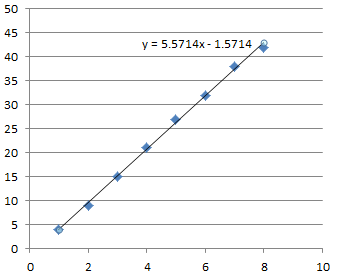 In the wild, a female rabbit lives for about a year on average and in that time can have around $20$20 offspring. Suppose roughly $5$5 of these are females who themselves survive to maturity and begin to reproduce. Imagine that to a small island previously uninhabited by rabbits, a breeding pair is introduced. Ecologists then observe the above breeding pattern over a period of four years.