We've already looked at scatterplots and how to describe relationships between different sets of variables.

Here is a summary of different types of linear relationship:

The closer the dots in a scatterplot are to a straight line, the stronger the correlation.

Once we can identify the type of relationship between two variables, we can make inferences about these variables and use them in everyday life. For example, say there is a positive relationship between study and results. From this, we can say that the more someone studies, the better they will do in their exams.

Identify the type of relationship represented by the following scatter plot.

A) Negative linear     B) No relationship     C) Positive linear 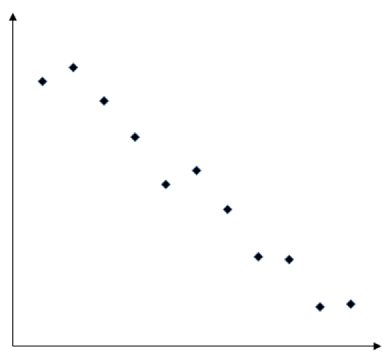 Do: When we look at this graph, we can see that as $x$x-variable increases, the $y$y-variable also increases. So this graph is an example of an A) negative linear relationship.

The marks of $12$12 students in Maths and Sport were recorded in the following table.

Scientists were looking for a relationship between the number of hours of sleep we receive and the effect it has on our motor and process skills. Some subjects were asked to sleep for different amounts of time, and were all asked to undergo the same driving challenge in which their reaction time was measured. The table shows the results, which are to be presented as a scatter plot.