We've already learnt about proportional relationships, where two quantities vary in such a way that one is a constant multiple of the other. In other words, they always vary by the same constant.

Proportional relationships are a special kind of linear relationship that can be written generally in the form $y=kx$y=kx and always pass through the origin $\left(0,0\right)$(0,0).

To interpret information from a graph, we need to look at pairs of coordinates. Coordinates tell us how one variable relates to the other. Each pair has an $x$x value and a $y$y value in the form $\left(x,y\right)$(x,y).

It doesn't matter what labels we give our axes, this order is always the same.

Let's look at some examples and see this in action.

The price for playing arcade games is shown in the graph. 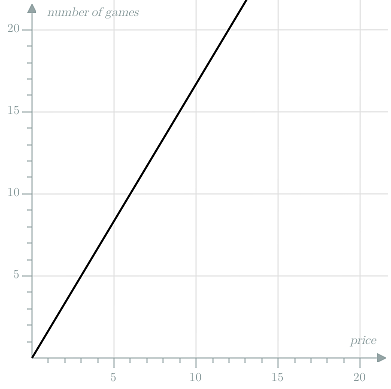 Think: Which variable does each axis represent?

The number of eggs farmer Joe's chickens produce each day are shown in the graph.

The number of liters of gas used by a fighter jet over a certain number of seconds is shown in the graph. What does the point on the graph represent?