Units of Mass (and conversions)

When we measure how heavy something is, we work out its mass. Depending on what we are weighing, we may choose a different of measurement. You may like to refresh your memory of which unit of measurement we might use for some objects, where you'll see examples of:

Converting between milligrams and grams

The smallest unit of measurement is the milligram (mg), and there are $1000$1000 of them in a gram (g). To convert between mg and g, we'll need to either multiply or divide by $1000$1000. When we weigh a pinch of salt, it doesn't even weigh 1 gram, so we might want to express that using milligrams.

How do you remember which one though? This video shows you how to convert from mg to kg, or vice-versa, and how to remember whether to multiply or divide by $1000$1000. 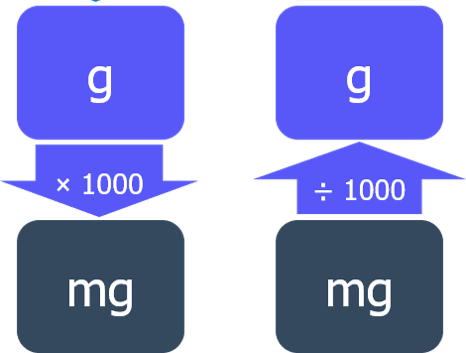 Working with grams and kilograms

When we have objects that start to get heavier, we might want to express their mass using grams or kilograms. There are $1000$1000 grams in a kilogram, so we don't have to remember anything new! When we convert to a bigger unit, we divide by $1000$1000, because we'll end up with less units, but they're bigger. Let's see some examples of how to do this in this video.

Here's our visual for converting from grams to kilograms, and vice-versa. 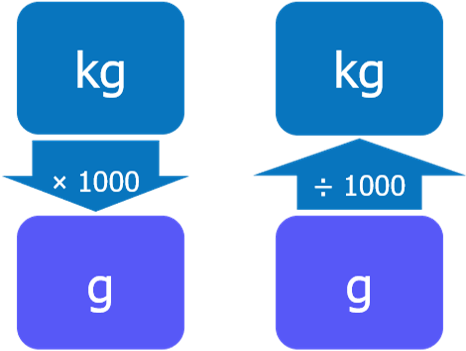 Now we're ready for our heaviest objects yet, kilograms and tonnes. We'll be looking at kilograms (kg) and tonnes (t), and converting between the two. Here are some objects that whose mass we might see in kg or t, or both.

This handy diagram shows how to convert at each step, and the best thing is, the difference is a factor of $1000$1000 at every step. 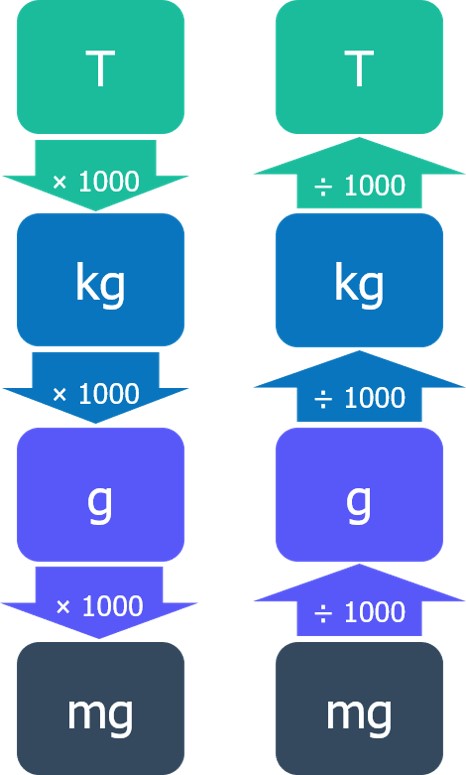