How many days in a month?

We normally take an average and say that a month has 30 days but not all months are the same.

Some people use this adage to help them remember:

30 days has September,
April, June and November.
All the rest have 31
Except February alone,
Which has 28 days clear
And 29 in each leap year.

Or you can use the knuckle method, where the months on the knuckles have 31 days and the months in the grooves have 30 (except February). 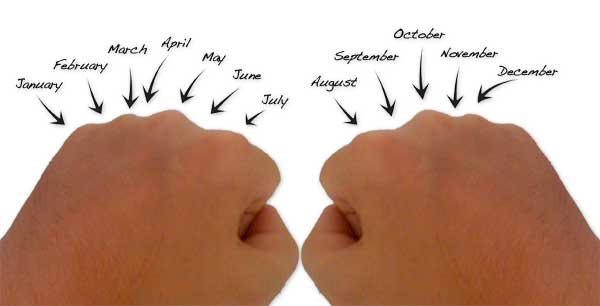 History is a timeline. Australia, like most other countries follows the Gregorian calendar, which is based on the Christian calendar. If you think of the year "0," time is divided before and after this. Anything after this point (just like when we count up using integers) is in the Anno Domini (AD) Era, which is also called the Common Era (CE). Anything before this "0" year (similar to negative numbers) is in the Before Christ (BC) Era or the Before Common Era (BCE).

What millennium are we in?

What century are we in?

So...how can you tell what year is going to be a leap year?

Interpret and use scales, timetables, and charts