Consider an object moving along a path. Maybe it is a car on a road network or an insect looking for food or a comet in the solar system. We might track the position of the object along its path at regular small time intervals.

A related concept is that of velocity.  This is the rate of change of position along a line. It takes into account both the distance travelled in a small time interval and also the direction of motion.

In tracking the position of an object moving along a path, we might create a table relating times to distances travelled. This information could then be displayed graphically using the Cartesian plane with times on the horizontal axis and the corresponding distances travelled on the vertical axis.

We have plotted the distance-time points on the graph below. The points from the table have been connected with lines on the assumption that the distances vary continuously between the recorded times. (There are no sudden jumps in distance.)

It is clear from the table and from the graph that the distances travelled over the equal time intervals are not the same. Thus, the slopes of the connecting lines vary and the varying slopes correspond to changes in the speed of the object. 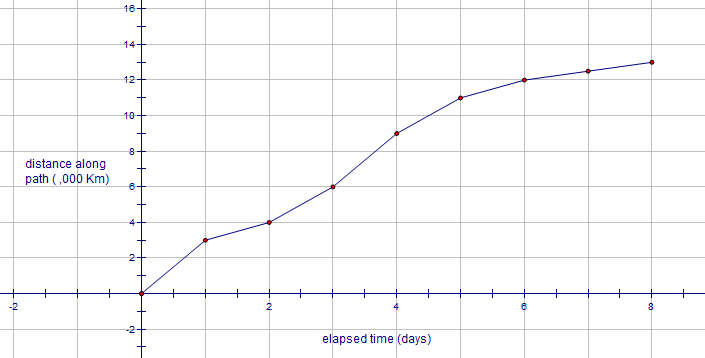 Because the distances were measured only once per day, the graph appears to have sudden changes of slope. In reality, the speed of the object could vary smoothly and we would obtain a more accurate graphical representation of the motion by measuring the distance over shorter time intervals, say half a day or one hour.

In the limit, if the time intervals could be made very short, the graph would be perfectly smooth and we could speak of the instantaneous speed of the object as the gradient of the smooth curve at the point of interest.

The speedometer of a car measures these instantaneous speeds.

As was done in the case of the table of distance-time data, we could record a sequence of instantaneous speeds of a motor vehicle or some other object at regular time intervals and then make a graph showing how the speed varies with time.

The time rate of change of speed is the acceleration. It corresponds to the gradient of the speed-time graph.

The following graph shows the same points as in the graph above but without the connecting lines. 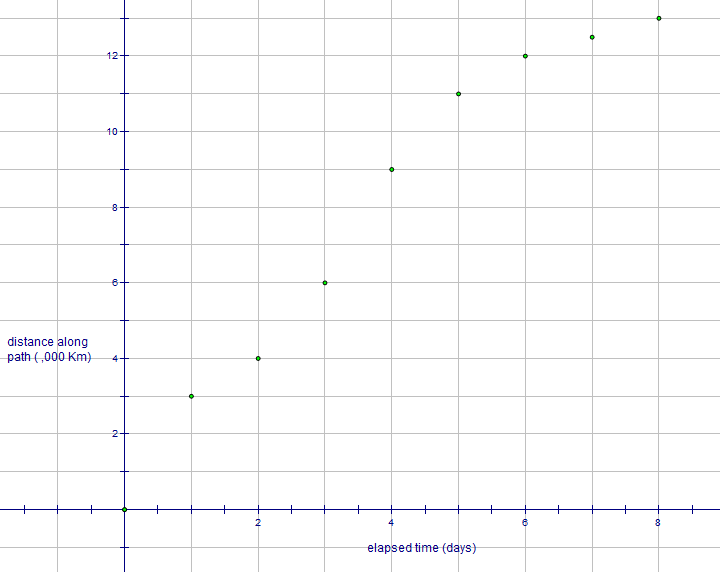 These ideas form the basis of the differential and integral calculus formulated by Isaac Newton and Gottfried Leibniz in the seventeenth century.

To see how the 'reverse' process works, consider a small slice of a speed-time graph, corresponding to a brief time interval of length $\Delta t$Δt. (The Greek letter $\Delta$Δ indicates a small increment in the variable $t$t.)

But, the quantity $\Delta s=v\Delta t$Δs=vΔt is just the area of the thin strip below the speed-time graph. It follows that the distance travelled at any elapsed time $t$t is just the cumulative total up to that point of the areas of all the thin strips that could be drawn beneath the graph. 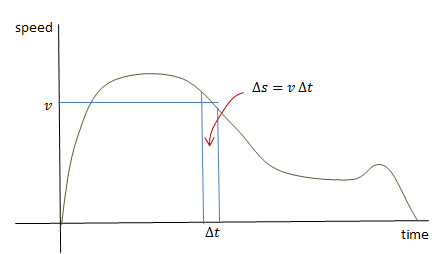