Introduction to a Normal Distribution

When the same measurement is made on a number of similar items, the recorded results constitute a data set of the kind referred to previously as univariate data.

For example, the amount of learning that has taken place in each student in a particular mathematics course might be measured by a formal test and the numerical results of the test are a univariate data set. Another example occurs when supposedly identical items are produced in a manufacturing process and measurements of a sample of the items are made to check that they are within specified tolerance limits. Generally, the measurements will vary around a mean value and if the process is working correctly will be not too far from the required value.

It often happens that most of the measurements will be clustered close to the mean value with the density of the observations falling off with distance away from the mean. Results of this kind displayed in a histogram show a central peak with columns of decreasing height on each side of the mean.

If there could be a vast number of observations put into the histogram with very narrow column widths, the variety of observations would give a bell-shaped histogram that reflects the way in which the frequencies of the observations diminish for values increasingly distant from the mean.

A data set that is symmetrical and bell-shaped about the mean, and which meets certain more precise shape requirements, is said to have a normal distribution or a normal probability density.  It is an idealised notion since we can never have a sufficiently vast number of observations and narrow enough column widths to make the corresponding histogram. However, it is a useful mathematical model.

You may have heard of a bell curve, which is a colloquial term for a normally distributed set as this pattern occurs commonly. People's heights, IQ and weights are all roughly normally distributed. Two important values are needed to graph or interpret a normal distribution: the mean and the standard deviation. The mean ($\mu$μ) is the location of the maximum density of observations and is where the curve is highest. The curve is symmetrical about the mean. In fact, in a normally distributed data set, the mean, median and mode all take the same value.

For example, this distribution curve comes from a data set that has a very small standard deviation, $\sigma=0.2$σ=0.2,  and hence is clustered tightly around the mean: 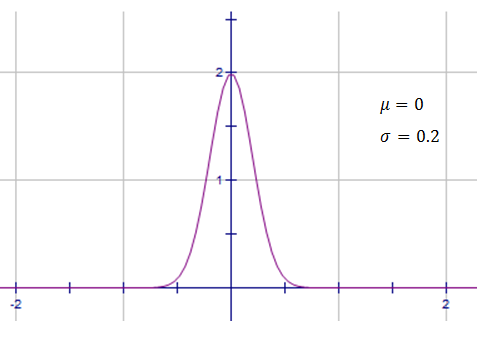 whereas this normal distribution has a larger standard deviation, $\sigma=0.9$σ=0.9,  and hence is quite spread.

Which of the following sets of data is approximately normally distributed?

Which of the following statements are true for a normal distribution curve. Select all that apply.

A sample of professional basketball players is normally distributed and gives the mean height as $199$199 cm with a standard deviation of $10$10 cm.