Combined Transformations on the Cartesian Plane

We see reflections all the time- in mirrors, in pools of water and so on. A flip is a reflection over a line or axis. We can see in the picture below that the blue object has been reflected over the vertical axis to create the green image. Notice how they are exactly the same distance from the $y$y-axis? 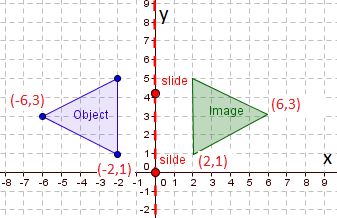 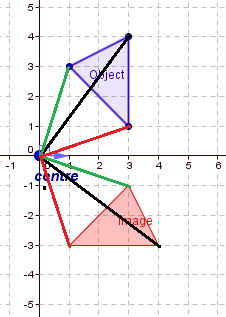 The whole shape moves the same distance in the same direction, without being rotated or flipped. In the picture below, we can see the object has been moved up $5$5 units. 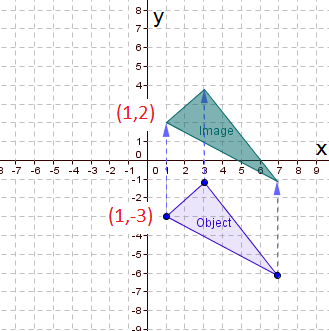 After any of those transformations (rotations, reflections and translations), the shape still has the same size, area, angles and line lengths. Note that a shape may be transformed in more than one way.

Below are some worked examples where there is more than one transformation.

For the point on the plane, plot the point that will result from a translation of $4$4 units right and $2$2 units up, followed by a rotation of $90^\circ$90° anticlockwise.

Plot the triangle that will result when the original triangle is reflected on the x-axis and translated 1 unit right.

Triangle ABC is first reflected about the given line to form triangle DEF.

a) Plot the triangle DEF

b) Triangle DEF is reflected about the y-axis to form triangle GHI.  What single transformation would overlap triangle ABC onto triangle GHI?

a) What are the coordinates of point B?

b) Point B is then translated to the left so that it lies on the same vertical line as point A.  How many units to the left is point B translated?

Analyse symmetrical patterns by the transformations used to create them