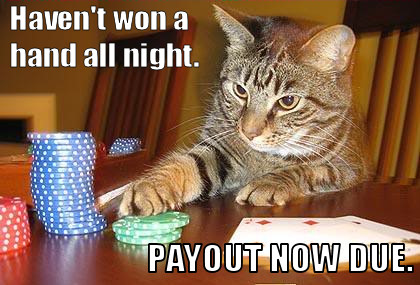 Just like this cat, many gamblers feel that after a losing streak, things can only get better. For example, let's say that they're playing a coin toss game and have bet on heads for the last 5 times, and every time the coin has landed on tails. What should they do now? Give up? No way! It feels like it must be incredibly unlikely for the coin to land on tails yet again, so many gamblers stubbornly continue to bet more and more money on heads, thinking that a win must be "overdue".

As intuitive as this way of thinking is, it doesn't actually work in the real world. The chance of each toss is completely fifty-fifty, regardless of the result of the previous tosses. The reason why is simple: coins don't have a memory. They can't remember how they landed on the last five tosses, or even the most recent one. However, the notion that events should happen so as to "balance out" is very common, so common that it has it's own name: the Gambler's Fallacy. A fallacy is another word for a logical error, and this one happens to be made a lot by gamblers.

A classic story about the Gambler's Fallacy can be seen in an event at the Monte Carlo Casino in 1913. The roulette wheel kept on coming up black, and so gamblers kept betting on red, thinking that red must be overdue. The more times the wheel landed on black, the more money people would bet, thinking that red must be becoming more and more likely. In the end, the wheel landed 26 times in a row on black, and the gamblers lost millions betting on red.

As well as contributing to phenomenon of Gambling Addiction, which costs Australia alone $4.7 billion per year, the Gambler's Fallacy leads to poor judgement in many other aspects of life, including financial investments and even soccer goalkeeping.

1. Can you think of any other situations where the "Gambler's Fallacy" might influence people's decision making?

2. In what situations might the "Gambler's Fallacy" be correct?

Events like a toss of a coin or a roulette spin are called "independent events" because they are completely independent from one another. The result of the last roulette spin does not effect the next one at all, and so each probability can be considered completely independently. Although gamblers felt that it would be extremely unlikely that red would come up again after 25 times, the chance was still exactly $50%$50%, the same as it was on the first spin.

You can test the Gambler's Fallacy out for yourself using this coin simulator. According to the Gambler's Fallacy, a coin which has landed heads many times in the first $50$50 times would be more likely to land tails in the next $50$50 times, so that it "balances out". Toss $100$100 coins using the simulator, and see which one starts off in the lead after $50$50 tosses. Over the next $50$50 tosses, see whether the other one catches up to "balance out" the lead, or whether the mismatch exists until the end. More often than not, you'll find that imbalances that exist after $50$50 tosses are not corrected by the end.

A simple trick to calculate the probabilities of independent events is to string the outcomes you want  together with the words "AND" or "OR" between them. For example, let's say you want to find out the probability of two heads:

The next step is to replace the word "Head" with the probability of getting a head, which is $\frac{1}{2}$12​, and the word AND with a multiplication sign.

Probability = (Head AND Tail) OR (Tail AND Head)

We replace the OR with an addition sign, in the same way that we replaced the AND with a multiplication sign.

3. Find the probability of getting three heads in a row.

Is it Hard to Roll Double Sixes in Monopoly?

There is nothing more satisfying than rolling double sixes in Monopoly. You can run right past your rivals, and get another turn! Too bad it's such a rare event.

Probability of a one then a three = One AND Three

If you don't believe the maths, try it yourself on this dice simulator! Pick a particular sequence of numbers, like "one followed by a ", and see which comes first, two sixes or your special sequence. You'll find that around $50%$50% of the time, two sixes will come up first!

The reason why we perceive other sequences to be more common is that we don't pay attention to the order. If you are allowed to throw a one and a three in any order, the probability is greater:

Another key reason is that in games like Monopoly, we tend to add the numbers together. If we just ask for "numbers which add up to make four", then there are even more ways to do this:

How Easy Is It To Roll a Seven?

A nice trick to know next time you play Monopoly is that seven is the most likely number in the game, because there are so many different ways of making it.

4. See if you can work out all the different ways of rolling a seven with two dice is, and from this what the probability of getting a seven is.

Every morning Mae has toast for breakfast. Each day she either chooses honey or jam to spread on her toast, with equal chance of choosing either one.

Lucy has a box of Favourites chocolates. In this box there are $30$30 chocolates, $5$5 of which are Picnics.

Lucy takes and eats a chocolate without looking until she gets a Picnic.