In many situations, we calculate how likely it is that an event will occur by counting all the possible outcomes and also the number of outcomes that would be considered a success for that event.

In many other situations, it is not possible to estimate probabilities by counting (or measuring) anything. We instead rely on past experience or historical data concerning the outcomes of similar experiments or processes. We assume that if event $A$A occurred in $75%$75% of similar situations in the past, the probability of event $A$A occurring this time is $75%$75%.

Sometimes, the event that we are interested in is really a combination of two other events. The two events that make up the compound event are connected in ordinary language by the words OR or AND.

For example, a certain sporting event will be CANCELLED if THE CREEK IS FLOODED or if IT IS RAINING HEAVILY on the day. This means that if either one of the events connected by the word OR occurs, then the cancellation event will occur.

In other situations, we might say event $C$C occurs whenever both event $A$A occurs AND event $B$B occurs. For example, you will receive an AWARD if you EXCEED THE TARGET and if your TEAM DOES NOT FAIL.

The problem can be illustrated with diagrams like the following, called Venn diagrams. The ideas behind the diagrams are taken from the theory of sets. 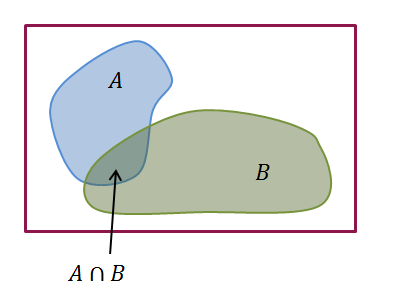 If we wish to combine the probabilities associated with events $A$A and $B$B when either $A$A or $B$B occurs, the natural thing to do would be to just add the probabilities. We would do this if we were thinking of a compound event that occurs when either event $A$A or event $B$B occurs, or both. In the language of set theory, this combination of events is called the union of $A$A and $B$B. It is notated $A\cup B$A∪B.

In the case of disjoint events $A$A and $B$B, the addition rule simplifies to

The overlap of events $A$A and $B$B in the Venn diagram above, which we called the intersection of $A$A and $B$B, is the set of outcomes that would enable us to say that both $A$A AND $B$B had occurred.

To see how the separate probabilities of events $A$A and $B$B can be combined to give the probability of the intersection event $A\cap B$A∩B, we need to introduce the concept of independence of events.

In everyday language, we mean by independence that the chance of one event occurring is not affected by the occurrence of the other.

If this condition is fulfilled, we can multiply the separate probabilities to obtain the probability of the intersection. That is, if the occurrences of events $A$A and $B$B do not influence one another, we can say the probability of $A$A AND $B$B both occurring is given by

Seven numbers are both odd and prime.

One number is even and prime.

We could list the outcomes in a table, as follows:

There are $21$21 cells that contain at least one odd number.

There are $9$9 cells that contain two odd numbers.

There are $6$6 cells in which the first number is even and the second odd.