Line graphs are very common. They are usually used to display continuous data and are often used to show changing information. Examples of data that could be displayed in a line graph include temperature, your heart rate throughout the day and a company's daily sales.

Basically, a line graph is drawn as one continuous line to show a continual (usually changing) set of scores.

The line graph shows the amount of petrol in a car’s tank. 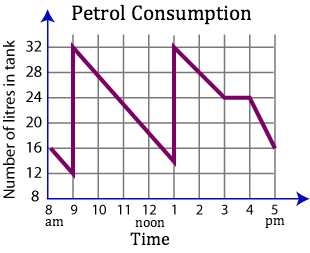 a) How much petrol was initially in the tank?

Conversion graphs are line graphs which are used to convert one unit of measurement into another. We can find equivalent values between two different scales by looking at a point on the graph and comparing the values on the $x$x-axis (i.e. the horizontal axis) and the $y$y-axis (i.e. the vertical axis).

Attached is a conversion graph of Celcius to Fahrenheit. 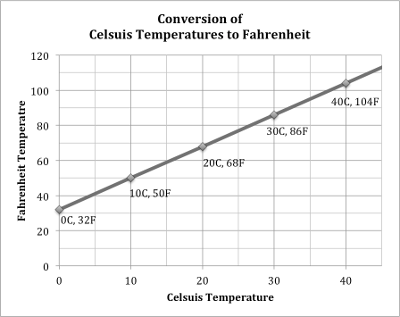 a) Water freezes at $0^\circ$0°C. What is this temperature in Fahrenheit?

c) If the temperature increases by $1^\circ$1°C, how many degrees Fahrenheit does it increase by? Give your answer as a decimal.

d)   Complete the rule for conversion between Celsius (C) and Fahrenheit (F):

Step graphs are another special type of line graph. They are used to display data which falls into separate intervals that do not overlap.

The graph shows the cost of sending parcels of various weight overseas. 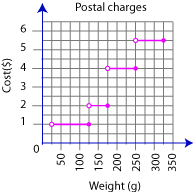