A formula is like an equation. It usually has an equals sign and describes a relationship between variables. Formulas are often used to solve specific real world problems. They tend to have multiple variables represented by uppercase and lowercase letters. 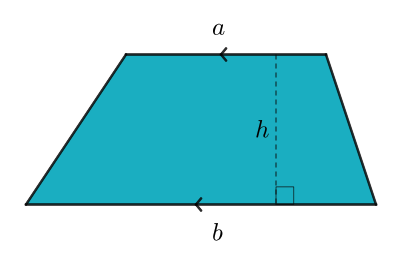 Note that the plural of formula can be written as either formulas or formulae.

The subject of a formula

All formulas have a single variable by itself on one side of the equals sign (usually the left-hand side). This is known as the subject of the formula. In the area of a trapezium example above, the variable $A$A is the subject.

In evaluating algebraic expressions, we substituted values for the variables in a formula and evaluated the subject.

In some situations we know the values for all of the variables in a formula, except for one, which is not the subject. To find this unknown, we substitute all known values into the formula, and simplify any calculations. This will result in an equation with one unknown variable, which we solve just like any other equation.

Think: Begin by replacing all known variables in the formula with their values. After simplifying, solve the resulting equation for $b$b.

This is a linear equation, which we solve in the normal way:

So the shorter side length of the rectangle is $b=90$b=90 units.

Think: Once again, we begin by replacing all known variables in the formula with their values. After simplifying, solve the resulting equation to find $h$h.

Reflect: Notice that it is often easiest to keep $\pi$π as a symbol in our working, until the final step. In this way we avoid rounding errors in our calculations.

The surface area of the rectangular prism is given by formula $S=2\left(ab+bh+ah\right)$S=2(ab+bh+ah).