A function is like an equation that relates an input to an output. We commonly express functions in the form:

We can think of it like a machine that has an input and an output, like you can see below. We take a value, $x$x, apply a rule (i.e. put it through the function machine) and get an output value, $f(x)$f(x). The output value can also be referred to as "$f$f of $x$x". 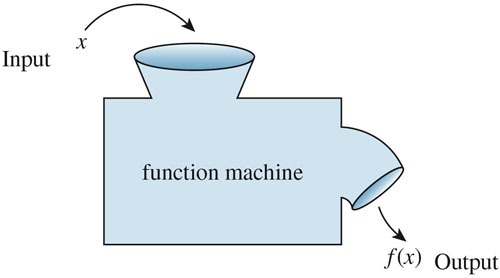 Combining these features together allows us to make interpretive statements and conclusions about the context.

What are our 3 questions?

What do the axes represent?

The horizontal axis (or $x$x-axis) is time, measured in seconds. As time passes we follow the graph from left to right. This will tell us a story about what is happening. The object starts at $0$0 seconds and the graph stops tracking the object at point $F$F at $25$25 seconds.

The vertical axis (or $y$y-axis) is speed, measured in m/s. As we move higher up the axis the speed gets faster. So the higher the line goes the faster the object is moving.

Is the line increasing, decreasing or flat?

What does the steepness of individual sections tell us?

Why look at the context?

Once we have thought about the three context questions, we are now well prepared to answer anything about the graph or the object. It is really important that you always take some time to understand the context before trying to jump in an answer questions. The understanding that you get from doing that will help to ensure you get the questions correct! 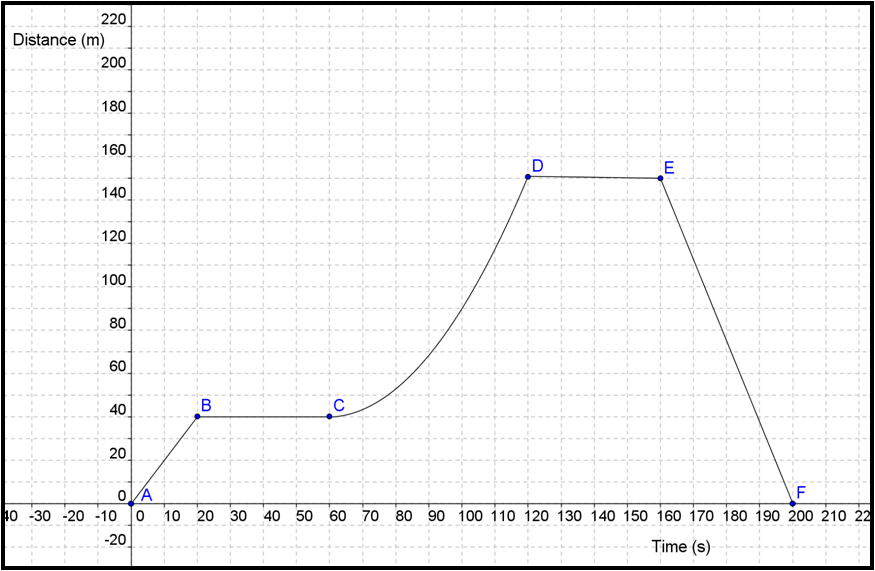 This graph may look more complicated, but by asking our $3$3 questions we can get a picture of what is happening.

What do the axes represent?

The horizontal or $x$x-axis is time, measured in seconds. As time passes we move from left to right. This graph tells the story of an object starting at $A$A, and $200$200 seconds later finishing at $F$F, (back where it started).

Is the line increasing, decreasing or flat?

What does the steepness of individual sections tell us?

The steeper a line, the more distance traveled in a short amount of time. This means that steeper lines indicate a faster moving object. Flat lines tell us that the object is not moving at all.

Now that we have an understanding we can actually create the story of this object.

We could get even more creative with our story, and use less numeric detail.

Try making your own story with a graph to describe it- perhaps a car chase or a roller coaster ride.

Football fans might want to check out this fun interactive for how graphs can describe scenarios in a football match. (Note: it will only work on a Flash enabled device, ... sorry )

There are different types of data. Make sure you're familiar with them by reading through Sorting Your Info.

The graph shows Charlie's speed while he is competing in a bike race. Which situation corresponds to the graph?