We've started to learn how to write word problems as algebraic expressions. Let's build on that knowledge now. We'll start by refreshing ourselves with some different names for the four operations. They are displayed in the mind map below. Can you think of any more? 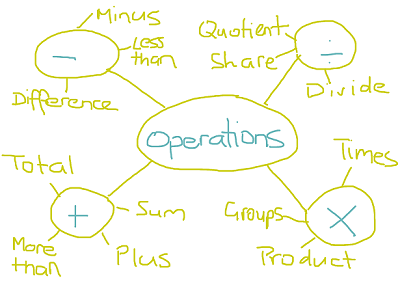 Converting worded problems into mathematical expressions takes practice and it helps to be familiar with the language of maths. Let's look at some examples below.

When it comes to word problems, we often need to simplify the information into a mathematical expression to make it easier to understand and use.

Say there is a certain amount of fuel left in the tank and at the petrol station we pump $30$30 litres of fuel to fill the tank. Now, because we don't know exactly how much fuel there was in the tank to begin with, we can use a letter called a variable or a pronumeral to represent the amount, a common letter being $x$x. That means the expression for the total amount of fuel in the tank is $x+30$x+30. Mathematical expressions that use variables are called algebraic expressions.

An important thing to note is that when writing a number multiplied by a variable, the convention is to leave out the multiplication sign. For example, $2\times x$2×x becomes $2x$2x. The $2$2 here is also called the coefficient of $x$x.

Think: "Sum" means we need to add the terms.

Equations are number sentences with an equal sign in them. In other words, they are formed when two expressions are equal in value. We can build algebraic expressions by constructing equations first.

From the first example, we have an expression for the total amount of fuel in the tank:  $x+30$x+30

So an expression for the amount of fuel initially is given by $y-30$y−30.

When we know the relationship between two or more amounts that are equal in value, we can form an equation describing that relationship in a mathematical way.

The algebraic equation used to represent this relationship is $y=3x+5$y=3x+5.

Sometimes the use of brackets is necessary to express the correct order.