It isn’t always obvious at first glance whether a graph is planar or non-planar - sometimes you have to move the vertices around for a long time before none of the edges cross.

The top graph is planar, and below it are three of its equivalent planar representations.

Here are two simple graphs. Use the applet to drag the vertices. Can you work out whether they are planar?

Once a planar graph is organised into a planar representation, we can define a face (or region) as the area of the plane bounded by edges. Important! The part of the plane outside the graph is also a face.

In all three planar representations of the graph from earlier, each face has been given a different colour - this graph has $4$4 faces.

The octahedral graph (which represents a $3$3-dimensional octahedron solid) has $8$8 faces.

Non-simple graphs that are planar also have faces, though some of their faces are bounded by only one or only two edges:

If a graph is not planar, then there are no faces to define - the crossing of edges makes it impossible.

The Swiss mathematician Leonhard Euler (pronounced “OIL-er”) was a pioneer in the mathematics of networks in the 18th century. He noticed something interesting about networks that are connected and planar, which is that the number of vertices $v$v, the number of edges $e$e, and the number of faces $f$f, satisfy the formula:

We call this formula Euler's formula.

To show that Euler's formula holds for this graph we can evaluate the left-hand side of the formula and show this is equal to $2$2:

Since $v+f-e\ne2$v+f−e≠2, the network does not satisfy Euler's formula and there is not a connected, planar network with these properties.

Since $v+f-e=2$v+f−e=2, the network satisfies Euler's formula and is therefore planar.

Reflect: There is only one simple, connected network with two vertices - it has exactly one edge joining both vertices together. This means the network we are looking for will not be simple. Here is an example of a non-simple network with $2$2 vertices, $5$5 edges and $5$5 faces:

Consider the graph shown below. 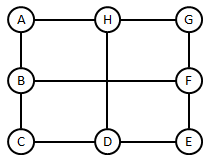 explain the meaning of the terms: planar graph, and face