8.03 Degrees, radians, and angles as rotations

Previously, we have defined angles as geometric objects - two noncollinear rays that share a common endpoint, or vertex. We can also define an angle as the action of rotating a ray about its endpoint.

If we view the angle in the coordinate plane, we say that the angle is in standard position if its vertex is at the origin and its initial side is along the positive $x$x-axis.

An angle in standard position

From the time of the ancient Babylonians, it has been the practice to divide circles into $360$360 small arcs. The angle subtended at the center by any one of those arcs, is called one degree. In effect, an arc of the circle is used as a measure of the angle it subtends.

In a similar way, we now restrict our attention to circles of radius one unit, this is called the unit circle. We measure angles subtended at the center by arcs of this circle. This method of measuring angles is called radian measure.

In practice, angles given in radian measure are usually expressed as fractions of $\pi$π.

Because angles in radian measure are in essence just fractions of the unit circle, they do not require a unit.

Converting between degrees and radians

Complete the table below to find the corresponding radian measures of each angle.

Do: Complete the rest of the table in a similar way.

Simplify the fractions, if possible

Reflect: What patterns exist in the table of values above?

Give your answer correct to one decimal place.

Using the rotation definition of an angle, it's also possible to have an angle that rotates more than once around the circle. Rotations of this type will have measures with a magnitude greater than $360^\circ$360°(or $2\pi$2π).

Because of the rotation definition of an angle, it's possible to have two angles with the same initial and terminal sides but different measures. Angles that are related in this way are called coterminal angles.

Coterminal angles have measures that differ by an integer multiple of $2\pi$2π.

In general, an angle coterminal with another angle differs from it by an integer multiple of $2\pi$2π (if measured in radians) or $360^{\circ}$360∘ (if measured in degrees).

List: Two negative and two positive angles that are coterminal with $115^{\circ}$115∘.

Think: We need only add or subtract multiples of $360^{\circ}$360∘ to obtain the coterminal angles. 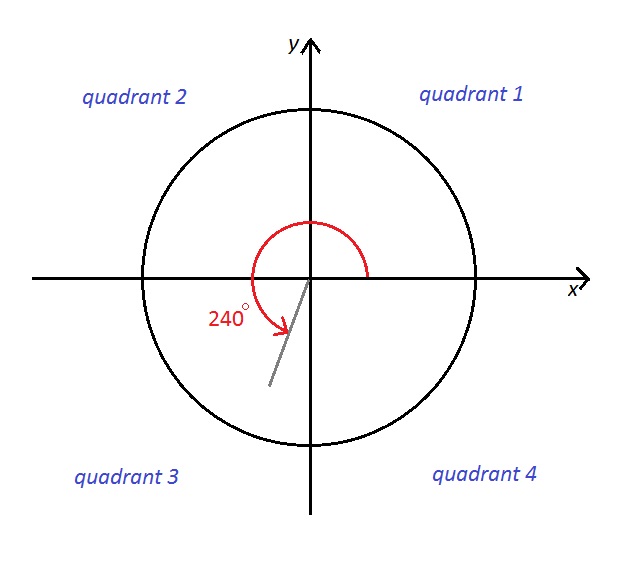 Find the angle of smallest positive measure that is coterminal with a $489^\circ$489° angle.

State the expression in terms of $n$n, where $n$n represents any integer, that generates all angles coterminal with $\frac{\pi}{2}$π2​.

In the circle with radius $1$1 centered at the origin, we measure angles of any magnitude between the positive $x$x-axis and the radius to a point that moves on the circle. The trigonometric functions of those angles are defined in a manner that guarantees that a function of any angle will be related to the same function of an angle in the first quadrant. We often use $\theta$θ for the angle and $\alpha$α for the acute reference angle. 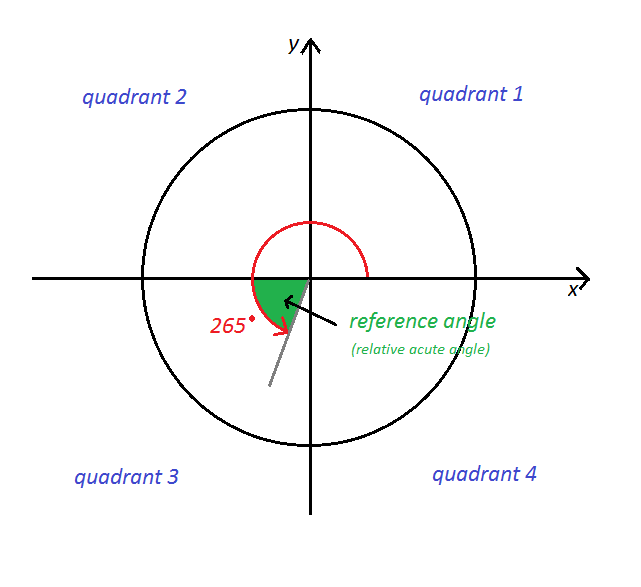 The first quadrant or acute angle to which a particular angle is related in this way may be called a reference angle. The reference angle is between $0^\circ$0° and $90^\circ$90°.

If the resulting angle is in the first quadrant, it is the reference angle. $\alpha=\theta$α=θ

Understand radian measure of an angle as the length of the arc on the unit circle subtended by the angle.