Research shows that the IQ of young people is increasing over time, which means that you are a member of the smartest generation ever. As a whole, your generation is more intelligent than your parents', your grandparents', or any generation that ever came before it.

This data is adapted from Flynn's "American IQ Gains From 1932 to 2002: The WISC Subtests and Educational Progress". Basically, the way IQ tests work is that 100 is set as the average. However, when the WISC IQ test (an IQ test for school-aged people) updated their test in 1972, 1989 and 2001, they found that the average of students had crept up. Therefore, they had to "standardize" the new version of the test so that it was harder than the previous one, in order to make the average 100 again. What this table represents is the way that average IQ would have changed if these "standardizations" had not taken place.

To analyze this data, we are going to use Google Sheets, a free online spreadsheet tool. If you have Excel on your device, you can use this as well, as the two programs are very similar. 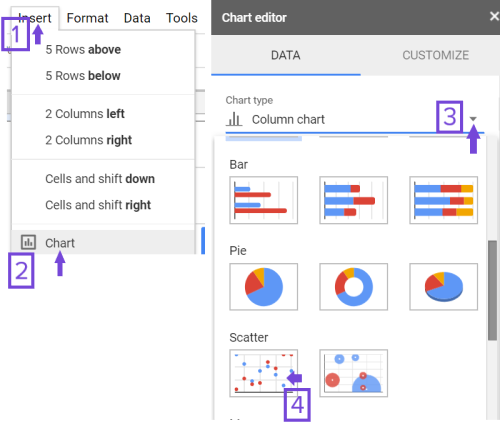 At first glance, the scatter plot looks like IQ is going up in pretty much a straight line. 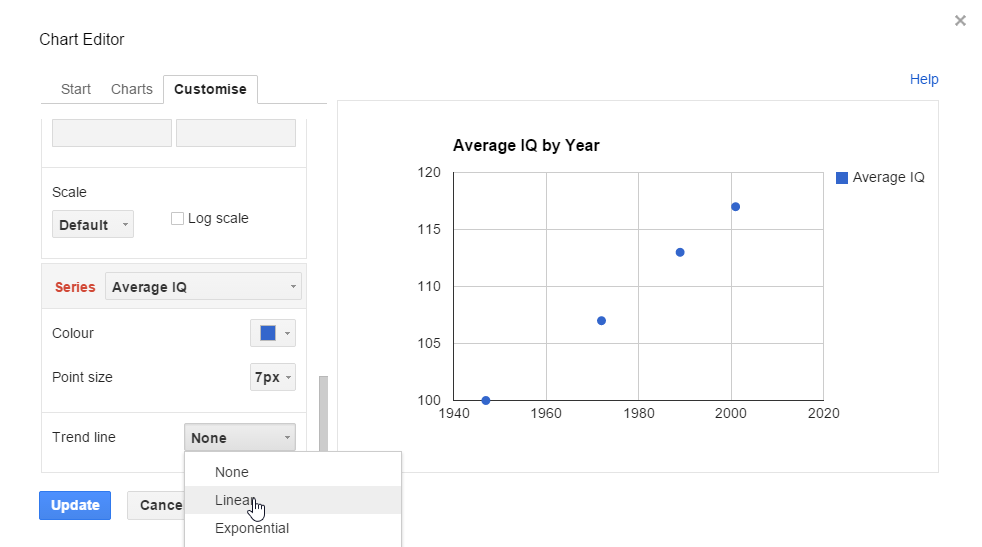 You should get a nice "line of best fit" on your graph. 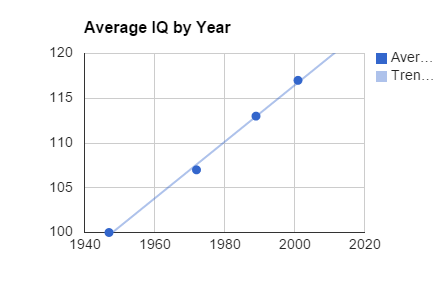 Looks like a pretty good match. And if that's all we were interested in, we could probably close the book on this one. But sometimes it's nice to be able to put a number to these things, something which allows you to easily communicate the result to other people.

Google sheets can calculate the correlation coefficient for you in the blink of an eye, using the =CORREL function.

So there you have it, the relationship between Year and Average IQ is pretty much perfect. If you do the calculations, you'll see that the rate of increase is approximately 3 points of IQ every ten years. That puts you guys on an average IQ of around 120 by 1940 standards, which back then would earn you an intelligence classification of "Superior"

Doesn't look so impressive, does it? Copy and paste the data into Google Sheets, and follow the same procedure to generate a scatter plot with a trend line. 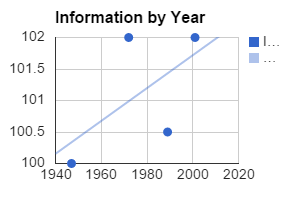 Of course, this just one theory,and no-one really knows whether this is the right answer. Since your generation is apparently the smartest one so far, see if you can figure it out for yourself!

Over to you! Plot the result on a spreadsheet, make a scatter plot, add a trend line, get a correlation coefficient, and see if you can interpret it. More importantly, see if you can critique this approach: what does this data really say about the relationship between money and happiness? Can we trust it? What other evidence would you want to see? Should we even be analyzing things like this mathematically, or should we be leaving it to the philosophers? Does the answer matter enough to require a scientific response, or should it just be a matter of personal opinion?

If you want to read more about the mathematics of the relationship between money and happiness, you can read this article (which has groups of graphs and math), or this one (which has no graphs or math).

Compute (using technology) and interpret the correlation coefficient of a linear fit.