What's the rate of change?

Recall that a rate is a ratio between two measurements with different units.

When we graph these rates, the rate of change can be understood as the slope, steepness or slope of a line. Further, we look at the equations in slope-intercept form (that is, $y=mx+b$y=mx+b, where $m$m is the slope), the larger the absolute value of $m$m, the steeper the slope of the line.

The rate of change in a graph can be increasing or decreasing.

The rate of change of a line is a measure of how steep it is.  In mathematics we also call this the slope.

The rate of change is a single value that describes:

Take a look at this line, where the horizontal and vertical steps are highlighted:

Sometimes it is difficult to measure how far the line goes up or down (how much the $y$y value changes) in $1$1 horizontal unit, especially if the line doesn't line up with the grid points on the $xy$xy-plane. In this case we calculate the slope by using a formula:

Where you take any two points on the line whose coordinates are known or can be easily found, and look for the rise and run between them.

Slope from a graph

You can find the rise and run of a line by drawing a right triangle created by any two points on the line. The line itself forms the hypotenuse.

This applet allows you to see the rise and run between two points on a line of your choosing.

Slope of horizontal and vertical lines

Suppose that the distance ($x$x, in meters) is related to the time ($t$t, in seconds) by the relationship $x=3t$x=3t. Let’s plot this relationship first:

Notice that this is a linear function. Since speed is the rate of change of distance over time, we want to find out how the distance changes over any amount of time. Let’s start by picking two points on the line. We’ll use $\left(1,3\right)$(1,3) and $\left(3,9\right)$(3,9):

First we find the change in the independent and dependent variables:

And then we divide the change in distance by the change of time to get the rate of change:

So the speed is $3$3 m/s. We will get the same result no matter which two points we choose. Notice that this is the same as the slope of a linear function. In fact, this is always the case when the function is linear.

In the case of a linear function, the rate of change is the slope.

Note that the independent variable is most often time, but can be anything else.

What kind of slope does the following line have? 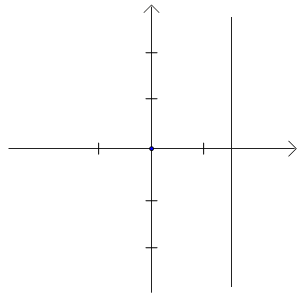 Gasoline costs a certain amount per gallon. The table shows the cost of various amounts of gasoline.

Identify, describe, and/or use constant rates of change.