Can these things happen at the same time?

When we think of things happening, we know some things can't occur at the same time. You can't be sleeping at the same time as you are awake. If you are standing up, you are not sitting down.

Then there are things that may happen at the same time. You might be standing up, or you might be eating. It's also possible that you are standing up and eating!

From the three arrows below, is it possible to choose an arrow that is straight and green?

In our first video, we will look at events where there can only be two possibilities.

A deck of cards has $52$52 cards. Within a deck of cards, there are different colors, numbers and patterns. This means there are many possibilities of things that could happen. In the second video, we look at having different options, to see what is possible.

Is it possible for the following two events to happen at the same time?

A die is rolled.

Is it possible for the following two outcomes to happen at the same time?

A dog is randomly selected from the group of dogs shown.

Which of the following outcomes could happen at the same time? 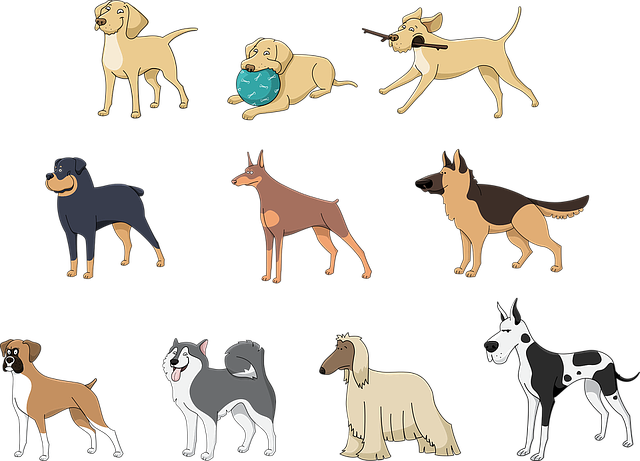 When does one event affect another?

When we look at the chance of something happening, there are ways in which the chance, or probability could be affected by what has already happened.

An independent event means that the chances of that event happening are not changed by what happened before. For example, when we flip a coin, there is always a $\frac{1}{2}$12​ chance that it will land on heads. It doesn't matter whether you tossed a head or tail before.

To see how this works, let's work through an example where you have four different colored lunchboxes and look at the chance of a particular color being chosen each day.

A dependent event means that the chance of that event changes depending on what happened before. For example, let's say you have an electronic claw machine game full of all different prizes. If you pull a toy car out, could someone else choose that same prize?

Let's look at your lunchbox colors again and see how the chance of picking a particular color changes when you don't bring them home at the end of the day.

A teacher has a "prize bag" filled with different prizes. The students form a line to draw a prize from the bag at random. Once a student has drawn a prize, they take it back to their desk.

Are their selections independent or dependent?

A card is randomly selected from a normal deck of cards, and then returned to the deck. The deck is shuffled and another card is selected.

We say that two events are independent if the occurrence of one event does not affect the probability of the other occurring.

This means you can also test for independence by verifying if P(A) x P(B)  = P(A and B).

A coin is tossed and a single 6-sided die is rolled. Find the probability of flipping a tail on the coin and rolling a 4 on the die.

Reflect:  Now why are the events independent here? You may think that in the case of selecting people from a population, we should not replace the first person before selecting the next. This would make the selections dependent. But consider the following:

Without going any further, you can see that the probability does not change that much.

So for a large sample space, the probability changes so little that we can consider successive events as being independent.

In a school, $25%$25% of students ride skateboards and $20%$20% of students have dark hair. One student is selected at random. What is the probability that the student:

An archer makes two attempts to hit a target, and the probability that he hits the target on any one attempt is $\frac{1}{3}$13​.

What is the probability that the archer will miss the target on both attempts?

In calculating probabilities of dependent events we often have to adjust the second probability to consider the fact that the first event has already occurred.  All 'without replacement' events are dependent.

Three cards are chosen at random from a deck of $52$52 cards without replacement. What is the probability of choosing $3$3 kings?

This results in the following probability of 3 kings being selected.

Reflect:  When you solve problems like this, you may find it helpful to draw a few boxes marking the $3$3 cards you are interested in, then writing the probabilities in each box. It's then easier to see what you need to multiply to calculate the answer.

What is the probability of drawing (without replacement) a Jack, Queen and King:

a) in that order?

A queen next, there are 4 possible queens out of 51 cards (remember we kept out a card).

A king next, there are 4 possible kings out of 50 cards remaining.

For the second card, I will want one of the other values (8 possible cards) from a total of 51. For example, if the first card was a Jack, then I want any of the Kings or Queens.

For the third card I will want the last card I need (4 possible) to complete my set from a total of 50 cards.

In a game of Blackjack, a player is dealt a hand of two cards from the same standard deck. What is the probability that the hand dealt:

Vanessa has $12$12 songs in a playlist. $4$4 of the songs are her favorite. She selects shuffle and the songs start playing in random order. Shuffle ensures that each song is played once only until all songs in the playlist have been played. What is the probability that: