We have already learned about slope and $y$y-intercept.

Use the applet below to refresh your memory on slope and $y$y-intercept and try to answer the following questions:

The applet above highlights that the $m$m value affects the steepness of the line, or the slope.

We also found that the $b$b value affects the $y$y-intercept, or where the line crosses the $y$y-axis.

In the equation $y=mx+b$y=mx+b, the terms $m$m and $b$b are called parameters.  A parameter is a placeholder for a value that indicates certain characteristics of a function, such as its slope or $y$y-intercept.

To graph any line you only need two points that are on the line.  When we are given an equation in slope-intercept form, we are given one point (the $y$y-intercept) and the ability to find a second point (using the slope), so we are all set!

Here is a little more detail on step 2.

Our graphs may not always be in this form so we may need to rearrange the equation to isolate the variable $y$y  (that means $y$y is on one side of the equation and everything else is on the other side).

Equations of horizontal and vertical lines

Recall that lines can also be either horizontal or vertical.  These types of lines will not look like slope-intercept form.  However, they do follow another type of special pattern.

Horizontal lines are the set of all points with a fixed $y$y value.  They are parallel to the $x$x-axis and have equations of the form $y=a$y=a, where $a$a is a real number.  Recall that horizontal lines have a slope of zero. 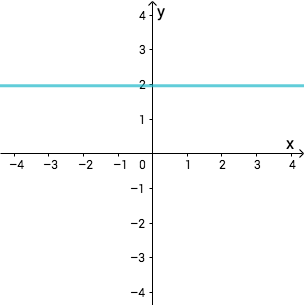 Vertical lines are the set of all points with a fixed $x$x value.  They are parallel to the $y$y-axis and have equations of the form $x=a$x=a, where $a$a is a real number.  Recall that vertical lines have a slope that is undefined. 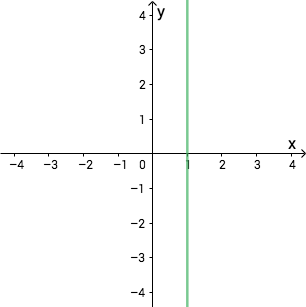 Consider the following graph of a line.

Plot the line $x=4$x=4 on the coordinate plane.