When we describe the shape of data sets, we want to focus on how the scores are distributed and whether the shape is symmetrical or not.

The picture below shows how the normal distribution can occur on a histogram. The dark line shows the nice, symmetrical polygon that can be drawn over the histogram.

In the distribution below, the $0$0 point in the middle represents the mean, the median and the mode - all these measures of central tendency are equal for this distribution, since it is symmetrical. If we use the line at $0$0 as our axis of symmetry, notice that the left hand side is a perfect reflection of the right hand side. 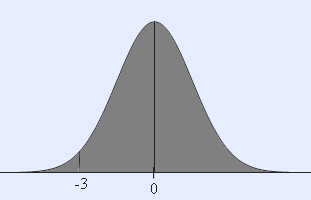 Notice that there are more scores above the peak than below the peak?

Notice that there are more scores below the peak than above the peak?

In a set of data, a cluster occurs when a large number of the scores are grouped together within a very small range.

The shape of a data also shows us whether there are any outliers or unusually high or low scores in our data set.

In this case the data is very obviously way outside the range of the rest of the data set.

So far we have learnt about three measures of central tendency: the mean, the median and the mode. These three measures all give us an approximation of where the centre is in a data set.

So when we are able to recognise the centre of data sets by finding the mean, median and mode, we can start to compare and make judgments about different data sets. We can say which one has the highest mode, the lowest median and so on.

Modality describes the prevalence of local peaks in a data set. The peaks don't necessarily need to be the mode of the whole data set, but rather a local cluster of data that is more frequent and stands out from the surrounding data. When we look at the modality of a data set, it is usually useful to examine a graph of the data.

We describe modality by the number of peaks. A data set that has two distinct peaks, like in the frequency polygon below, is called bimodal. 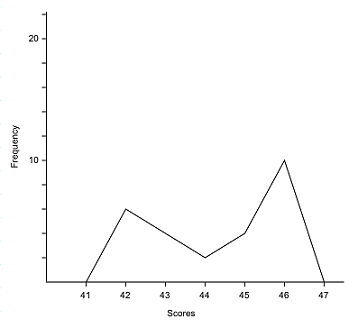 To determine the modality of a distribution, we can simply identify the number of modal peaks. For instance, we would say that the data shown in the dot plot below has three modal peaks because there are local peaks at scores of $6$6, $12$12, and $20$20.

For each of the following statements, decide whether they are true or false:

From the frequency polygon shown:

How many peaks are there on the graph?

Choosing a measure of centre

So how do we know which measure of central tendency is most appropriate for a data set?

Remember the mode is the most frequently occurring score. So if we notice that a data set has a significant number of repeated scores, then the mode could be a good measure of centre.

If the range of scores is reasonably small and there are no outliers, then the mean is an appropriate measure of centre.

Unlike the mean, the median is not affected by outliers. So the median is a good measure of central tendency if a data set has outliers or a large range.

Choosing a measure of centre from a graph

The shape of the data may also determine which measure of central tendency is the most appropriate measure of a data set.

Therefore, in skewed data, the most appropriate measure of central tendency will be the median.

Here is a basic summary of selecting an appropriate measure of central tendency. Note that often it can be helpful to consider more than one measure.

But of course, sometimes the context of the data we are analysing lends itself to particular measures as well.

Which measure of centre would be best for the following data set?

Which measure of centre would be best for the following data set?

Every week over $45$45 weeks, a kayaking club runs social sessions that are open to the public. On each session, the number of people who attend is recorded. The results are displayed in the table provided.

What measure of center would be most appropriate to use to represent the data in this graph?