Topics
9. Budgeting and Household expenses
9.01 Interpreting household bills
9.02 Purchasing a car
9.03 On-road and running costs of a car
INVESTIGATION: Getting on the road
9.04 The cost of fuel
LessonWorksheetPractice
INVESTIGATION: Choosing the right car
9.05 Preparing a personal budget

In order to manage our fuel expenses, we will need to answer the following questions:

The amount of fuel used by a vehicle is measured as a rate. It is based on the volume of fuel consumed per distance travelled.

Although a variety of units could be used, the industry standard for measuring a vehicle's fuel consumption is litres per $100$100 kilometres.

How fuel consumption is measured

The fuel consumption rate is measured in:

In everyday language, the terms 'fuel economy' and 'fuel efficiency' are often used to refer to the average fuel consumption of a vehicle.

Calculate the amount of fuel consumed for the following distances travelled:

When we decide to purchase a new car, we can use the manufacturer's fuel consumption rates to compare cars and choose the one with the best fuel economy.

Here is an example of fuel consumption rates for a 2018 model 4-cylinder petrol-engine hatchback: 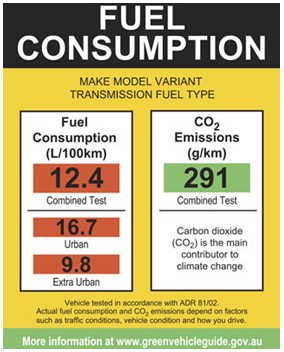 As of April 2009, all new fuel-based cars sold in Australia are required to have a fuel consumption label displayed on their front windshield, prior to sale.

The label indicates the three different fuel consumption rates as well as a rate for the vehicle's average CO2 emissions, measured in grams per kilometre (g/km).

The Australian government introduced these labels so that consumers are better able to compare fuel consumption and emissions values for different vehicles.

Labels such as this one only apply to vehicles that use fuel. Purely electric vehicles will display a different label.

Because rates on these labels are obtained from laboratory tests, 'actual' fuel consumption in real world conditions may be significantly different. This is due to a range and a combination of factors.

The advertised fuel consumption rate for a vehicle will depend on the following factors:

Real world fuel consumption is also influenced by the way the car is driven and how often it is changing speed. It may vary according to the following factors:

The price of fuel is something we have little control over, as fuel prices fluctuate according to supply and demand in global markets.

At service stations, the fuel price is advertised as a rate, based on cents per litre.

How fuel prices are advertised

The two main types of fuel used in Australia are unleaded petrol and diesel, with unleaded petrol being the most common. The popularity of diesel-fuelled cars has grown in recent years, despite a declining trend in other parts of the world due to environmental reasons.

The use of Liquid Petroleum Gas (LPG) or Compressed Natural Gas (CNG/NGV) in cars has declined significantly in Australia due to increased prices and cuts in government subsidies. It remains a common fuel type in some taxi and commercial vehicle fleets.

Consumers can use the NSW Fuel Check website (or app) to monitor fuel prices in their area and help them decide on the best times or locations to fill their car's fuel tank.

What about electric vehicles?

Petrol and diesel are based on non-renewable fossil fuels. When used in vehicles, they produce greenhouse gas emissions like CO2, and other potentially harmful pollutants. One of the most promising alternatives for reducing these emissions is electricity stored in on-board rechargeable batteries.

While newer hybrid and pure electric vehicles have recently started selling in Australia, they are still relatively expensive and not widely available. This is expected to change as demand increases and battery technology improves.

The prices of unleaded petrol (in c/L) for three different locations are given below.