Positions on the Earth's surface

Most people would be reasonably familiar with the idea of a street map and most street maps use coordinates, usually a letter and a number, to represent positions on the map.

These numbers appear on things like your GPS (global positioning system) or in online map programs like Google Maps. Here, for example, is the global coordinate of the Sydney Harbour Bridge in Sydney, Australia.

Longitude is a measure of how far a position is east or west of the Prime Meridian.  The Prime Meridian (which used to be called the Greenwich Meridian) is a special, imaginary line of longitude that is defined to be $0^\circ$0°. Another important line of longitude is the International Date Line (IDL), which has a longitude of approximately $180^\circ$180°, although it deviates slightly to avoid passing through certain countries and islands.

Whilst the lines of longitude are the vertical lines on the map, they are a measure of horizontal distance around the globe.

Latitude is a measure of how far a position is north or south of the Equator.  The Equator is a special line of latitude that runs through the centre of the Earth that is defined as having a latitude of $0^\circ$0°. The lines of latitude are the horizontal lines on a map, but they are a measure of the vertical distance above or below the Equator.

We can see on the map below, that the middle of Australia is located at $20°S$20°S, $135°E$135°E. (Unlike grid reference systems, coordinates using longitude and latitude use the vertical position first)

These longitude, and latitude coordinates are what GPS systems use to locate your position on earth.  The level of accuracy needed to pinpoint a particular person is of course a lot greater than that needed to identify the location of a country! Most common handheld devices like mobile phones that use a GPS are normally accurate to within $10$10 m.

The world map below shows the lines of longitude and latitude. Several locations are marked on the map.

(a) Which point is located on the Prime Meridian?

Think: The prime meridian is the line where the E/W is measured from, it has value $0^\circ$0°

(d) How many degrees south is point $C$C from point $B$B?

Think: To answer this we need to know how many degrees difference there is in the latitude.

Think: To answer this we need to know how many degrees difference there is in the longitude.

The difference can be found by thinking of it this way 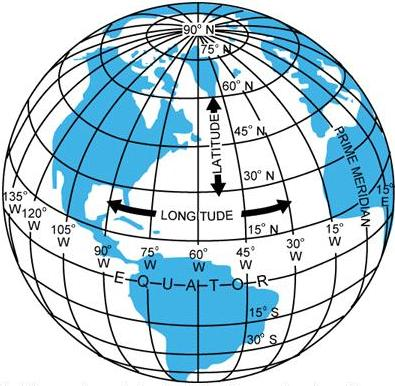