Think about the generating rule for a particular arithmetic progression given by $t_n=2n+3$tn​=2n+3. We can cleverly rearrange this equation to $t_n=5+\left(2n-2\right)$tn​=5+(2n−2) . By taking out common factors on the last two terms,  the expression becomes: 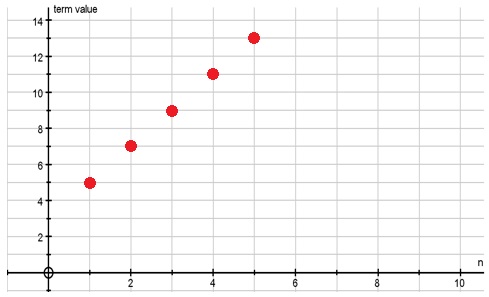 In the example above, where , the common difference is immediately recognizable as the coefficient of . A simple way of finding the first term is to evaluate  as .  We could place these values in a table as follows:

Arithmetic sequences are said to grow linearly literally meaning ‘in a straight line’. We find applications of linear growth in many areas of life, including simple interest earnings, straight-line depreciation, monthly rental accumulation and many others. Whenever something grows or diminishes in constant quantities over equal time periods, then that growth or fall is said to be linear.