People who earn wages are paid a set rate per hour to work a certain number of hours per week. If they work more than this set number of hours, they are entitled to receive overtime, which means that their rate of pay increases. This is done as an incentive to get people to work outside "normal" hours, such as on weekends or public holidays, or for working longer hours in one day than normal. 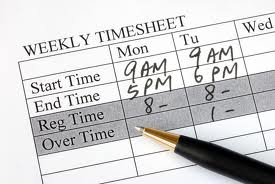 Double time: payment to a worker at $2$2 times their usual hourly rate.

Neil is a web designer who runs his own small business. He charges an hourly rate of $145.

B) How much would Neil charge for a callout between 6pm and 11pm?

D) How much would Neil charge for a callout between 10am and 5pm on a Sunday?