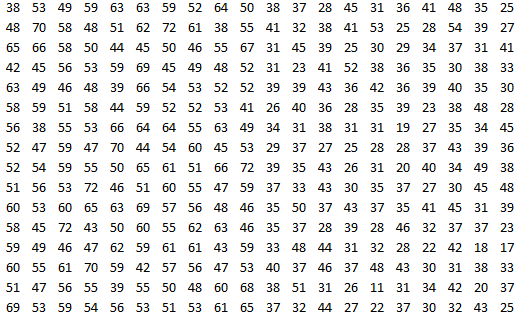 This data set represents observations on $320$320 experimental subjects. The task confronting the researcher is to make sense of the results. That is, the researcher wishes to discover the useful information that may be concealed within the numbers.

It is not difficult, using spreadsheet software to calculate

The computer also tells us the minimum, $11$11, and the maximum, $72$72. With this $5$5-number summary, a box-plot can be constructed as an early step towards making the data intelligible.

This gives some idea of the location and spread of the data points but it should be borne in mind that there are still many ways in which the data could be distributed. The same boxplot would arise if the numbers were fairly evenly spread or if there were clusters around the first and third quartiles or with many other arrangements. A picture can be helpful but it may also be misleading.

There is another way!

Another way of grouping the data is to allocate the numbers to several evenly spaced classes that together cover the range. In general, a decision is made about the number of classes into which the data is to be split and a count is made of the number of data points occurring in each of the classes.

In the following examples, there are two different histograms generated from the original set of data. In the first, a frequency table with classes of width $15$15 units was used. In the second, the class width is $5$5 units. 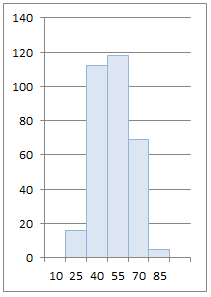 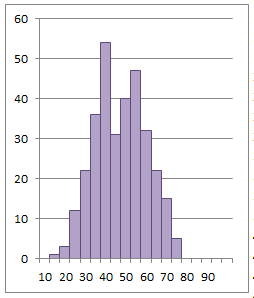 Although these two histograms come from the same data, they appear to be different. The second of them suggests that the data may be bimodal - having two peaks or modal classes. This property can indicate that data from two distinct populations are combined in the data set - males and females, for example.  Again, it is important to recognise that a visual representation of this kind can be used either to reveal or to hide facts about the data. When exploring a data set it is a good idea to examine it in several different ways, always relating representations by summary statistics and frequency tables to the original raw data.

Before digital technology made it possible to carry out statistical calculations on large data sets with relative ease, methods were in use for estimating statistics including the mean and the median from a frequency table. Although superseded by modern technology, these methods are still taught in schools and the exercises that follow this chapter relate to them.

A survey was conducted which asked 30 people how many books they had read in the past month.

Consider the table below.

Consider the scores that a statistician collected below.