Mr Maxwell and Mr Boltzmann, having independently developed a theory about the likely speeds of gas molecules, are sitting inside a large box of neon gas, observing the speeds of molecules as they fly past.

They wish to check by observation whether their theory describes what really occurs. There are a great many possible velocities that a molecule can have. So, instead of recording every one of them precisely, they decide to divide the velocity range into seven equally spaced magnitude classes and an eighth class for speeds that are higher than the rest. They put a tick in the appropriate class on their clipboards whenever a molecule goes past. In effect, they are counting the numbers of molecules seen to be moving at velocities within each subdivision of the magnitude range.

At the end of the experiment, they have produced a table like the following: 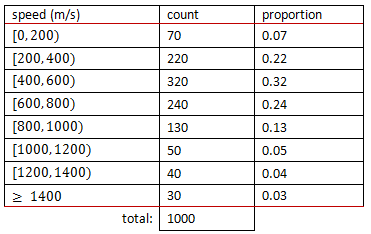 This is called a frequency table. It records how often a speed was observed in each of the classes. Exactly $1000$1000 molecules were observed in the experiment and this total was used to calculate the proportions in the third column of the table. Each proportion can be interpreted as the probability of observing a molecule in this speed class in a future experiment.

Of course, the physicists James Clerk Maxwell and Ludwig Boltzmann did not really count gas molecules in this fanciful manner. But, the idea of the frequency table is applicable in this and many other real situations, particularly those in which there are many individual observations.

Usually, the information gathered in a frequency table will be subsequently displayed graphically in the form of a histogram, like the following. 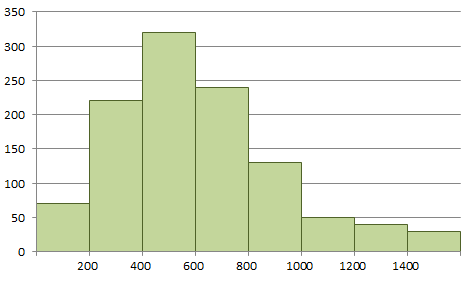