By using the means of central tendency in a data set (that is, the mean, median and mode), as well as measure of spread, such as the range, we can make comparisons between different groups.

Let's look at an example of data that compares different variables.

Study the bar graph below which shows the changes in tourism rates in different cities during $2011$2011 and $2012$2012, then answer the following questions. 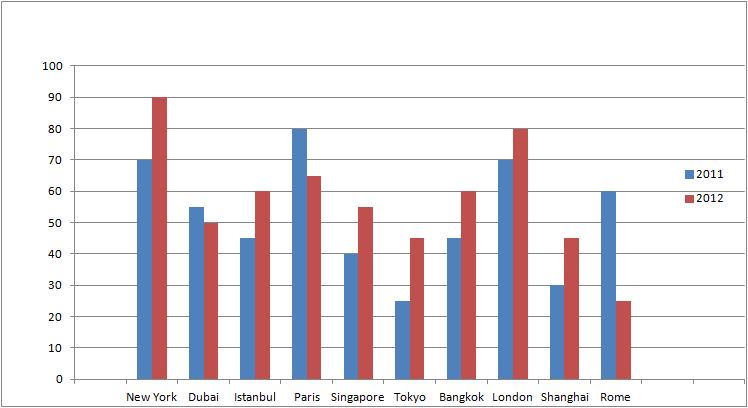 C) Which city had the highest percentage tourism in a single year?

Think: The taller the column, the higher the tourism rate.

D) Which city/cities had the lowest percentage tourism in a single year?

Think: The shorter the column, the lower the tourism rate.

Think: We need to find the difference between the two percentages.

F) Paris' maximum percentage of tourism over the $2$2 years is higher than that of Istanbul by:

Think: What are the highest rates for both cities?

Paris' highest tourism rate was $20%$20% higher than that of Istanbul.

We can also use data to predict, or make an educated guess about what will happen in the future. To make a prediction, we need to look at the way the data is trending.

Four friends collected some data about each other.

a) Construct a column graph depicting the students' arm spans.

Think: How do we convert the information from the table into a column graph?

b) Construct a column graph depicting the students' heights.

Think: This is just like the previous question, except we need to look at the height column this time. 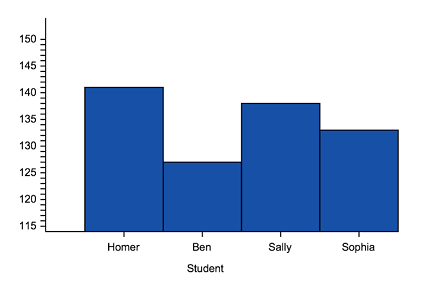 c) Which two of the criteria is there a relationship between?

Think: What information do our graphs show that will help us work out which two criteria there is a relationship between?

Do: There is a similar pattern in people's arm spans and heights. Therefore, we can say that height is always about the same as the arm span.

d) Which of the following statements are true?

Think: Which statement is true based on the relationship we found in part c?

Do: C) Height is always about the same as the arm span

e) Which of the following statements is true?

Think: Would the month someone was born actually affect how tall they are?

Do: The month you are born doesn't affect your height. So, we'd select B) The month has no bearing on how tall someone is.

In a zoo the most popular attractions are the Elephants and Zebras. Over $3$3 months the number of visitors (in hundreds) were recorded.

a) Which of the following is a reasonable prediction of the number of zebra visitors in August if the pattern was to continue?

b) Which of the following is a reasonable prediction of the number (in hundreds) of elephant visitors in August if the pattern was to continue?

c) Create a column graph to represent the number of zebra visitors each month.

d) Create a column graph to represent the number of elephant visitors each month.

e) If the trend continues, in what month will the two animals have roughly the same number of visitors?