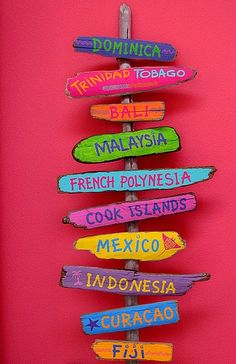 Travel graphs are line graphs that are used to describe the motion of objects such as cars, trains, cyclists or people. In other words, we use travel graphs to show journeys.

We can gather a lot of information from travel graphs, so it is important that we understand the different components. The distance travelled is represented on the vertical axis and the time taken to travel that distance is represented on the horizontal axis. The steepness of the line indicates the speed at which the object is travelling. The steeper the line, the faster the object is travelling. 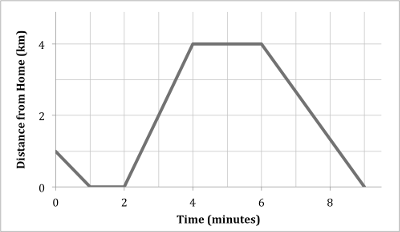 Let's say Bob recorded his distance from his home for nine minutes and his results are displayed in the graph above. We can see in the graph above that initially Bob was $1$1 km away from his house and he reached home $1$1 minute later. He stayed home for one minute (indicated by the straight line along the horizontal axis), then left a minute later. He travelled for two minutes until he was $4$4 km away from home. Then Bob stopped for another $2$2 minutes before he returned home, which took him another $3$3 minutes. We know Bob is home because the line finishes on the horizontal axis.

The next graph shows two different journeys. You can see that there is a difference with the steepness of the lines drawn. Remember that, the steeper the line, the faster the average speed. We can calculate the average speeds, by reading distances from the graph, and dividing by the time taken. 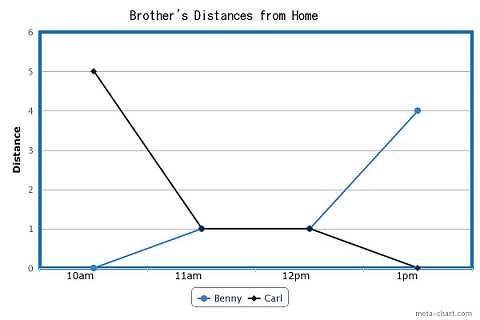 The graph shown describes Frank's distance from home throughout his journey.

A husband and wife transport medical equipment from their respective work sites throughout the day. The graph shows their distance from home. 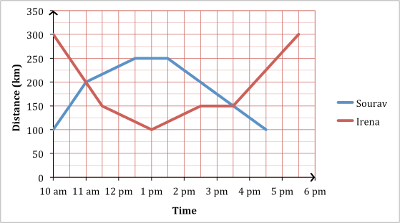