Dot plots are a graphical way of displaying the frequencies of discrete quantitative or categorical data. In other words, they show how often a particular choice was made or how many times an event occurred. They are best used for small to medium size sets of data and are good for visually highlighting how the data is spread and whether there are any outliers that may change our measures of central tendency, particularly the mean and the median.

How to construct or read a dot plot

We start off with a kind of number line or a list of all the possible outcomes in our study. For example, if the number of children in peoples' families ranged between $1$1 and $5$5, I would construct my dot plot with all the possible values we could have scored: $1,2,3,4$1,2,3,4 or $5$5: 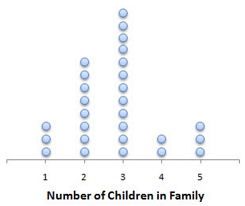 Each of these possible values is written on a number line. The number of dots above each score corresponds to the frequency of each score. For example, in the dot plot above, we can see that 3 families have one child, 8 families have two children and so on.

The goals scored by a football team in their matches are represented in the following dot plot.

Christa is a casual nurse. She used a dot plot to keep track of the number of shifts she did each week for a number of weeks.

The number of 'three-pointers' scored by a basketball team in each game of the season is represented in the dot plot. A 'three-pointer' is worth 3 points.