A set is a collection of objects that have a common property.

So, if you think about all the things in your pencil case, this could be considered a set. 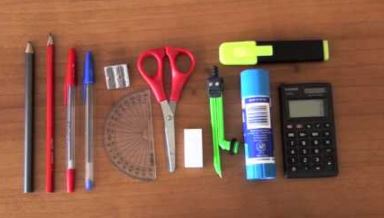 You can probably come up with heaps of other sets of objects. The clothes you have in your wardrobe, the names of streets you pass by on your way to school, animals that have four legs or people in your family for example.

To describe a set using mathematical notation, we use large curly brackets and list all the items of the set between them. Each object in the set is called an element.

The mathematical convention is to use capital letters when referring to the set, and lower case letters for elements in the set.  So the set $A$A of things I eat for breakfast can be written

We also use the symbol $\in$∈ to make statements about whether elements are part of the set or not.

Of course we can have sets in mathematics as well, and these sets tend to have numbers or algebraic symbols.

Let's have a look at some numerical sets.

Here as some larger sets,

These sets are all infinite sets as the number of elements in them is infinite. The $3$3 dots at the end of each, called an ellipsis, indicates that the elements of the set continue on.

Also called the null set, an empty set is (as you might guess) empty! It is a set that has no elements in it. It's important to note here that an empty set does not have a zero in it, it is completely empty!  We can write $\left\{\ \right\}${ } to represent the empty set, but there is also a special symbol we use to denote the empty set: $\varnothing$∅.

Two sets are equal if and only if they contain exactly the same elements. They can be equal even if the notation used to describe them is different.

We haven't yet finished with all the new terminology to work with sets.

What we have described here are subsets.

If there is at least one element in $B$B that is not included in the subset $A$A, then we call this a proper subset, and use the symbol $\subset$⊂. So $A\subset B$A⊂B is read as $A$A is a proper subset of $B$B. ($\not\subset$⊄ is used to say the opposite)

Not quite finished yet!

We could consider the image here as a representation of this situation. 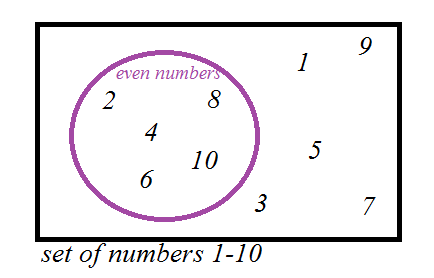 Note how the universal set is depicted using the external rectangle, and our set inside uses a circle. This is the most common representation and lead us to Venn Diagrams which we will look at later.

What if we wanted to describe the elements from the universal set that are not included in the subset $K$K?

Well we could define a new subset and nominate the elements not in $K$K to be part of it, or we could use the notation $K'$K′ or $\overline{K}$K as this refers to all elements NOT IN $K$K.

Consider the interval $\left(8,9\right]$(8,9] and answer the following questions.