Frequency trees provide a way of calculating probabilities when a chain of outcomes leads to a compound event.

In statistics, the word frequency means the number of occurrences of something.

Look at the following diagram. The labels on the tree branches indicate the rules used to split a main group into smaller frequency sub-groups. The numbers are the frequencies for each outcome. 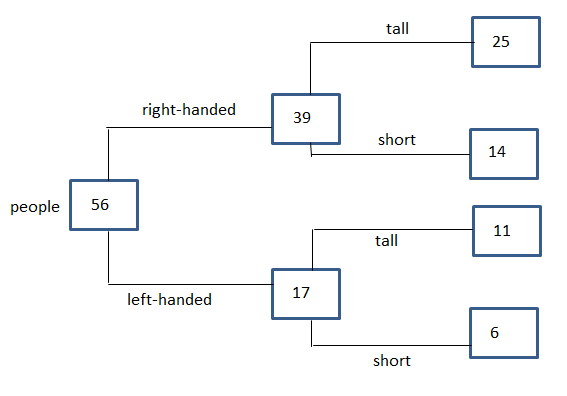 At each stage, there is a column of boxes forming the tree. The numbers in the boxes for each column have to sum to the same total- the number in the far left-hand box. This is because at each stage we are just splitting the numbers into smaller frequency groups.

We can draw some conclusions about the proportions of subjects in each category. Here are some examples:

In a properly constructed statistical experiment, the proportions deduced from the frequency tree would be taken to be estimates of the probabilities associated with each compound outcome. Note that this technique can help to answer questions in probability where outcomes are connected by the words AND and OR.

There are $44$44 chimpanzees in an enclosure at the zoo.