When we attempt to answer questions on any mathematical topic, we need to be able to choose, from among the techniques we have learned, the correct method for the task at hand. This chapter reviews some of the ideas previously presented concerning Probability.

We often understand probability by considering an experiment of some kind that can be repeated many times and which has possible outcomes that are well defined. We interpret the proportion of occurrences of a particular outcome in all the trials of the experiment as the probability of that outcome.

Usually, we discover the relative frequencies of the outcomes of an experiment by actually performing the experiment with a sufficiently large number of trials. Sometimes, we cannot perform an experiment but must rely instead on repeated observations of many similar situations.

In experiments in the physical sciences, for example, it is usual to repeat a procedure many times and to note the number of numerical outcomes that fall within each of several measurement categories. The result is then given as an average of the outcomes together with a probability that the true value is somewhere within a particular interval around the mean value of the observed outcomes.

In medical research, it may be unethical or impractical to perform an experiment. Instead, observational studies are made, comparing outcomes over a large number of subjects who are similar in respects that are not thought to affect the results of the study but who are given different treatments or who have some other difference thought to be important. Again, the relative frequency of the different outcomes in the study are interpreted as probabilities.

Similarly, surveys conducted to ascertain product preferences or political opinions are observational studies. The individuals interviewed in the survey are the experimental subjects and the relative frequencies of the various possible responses are interpreted as probabilities.

Sometimes, it is possible to find a relative frequency and, hence, a probability by counting theoretically the number of ways in which each member of a set of possible outcomes can occur. Probabilities concerning card and other games are often of this type. The idea of counting the numbers of outcomes that fall into each of several categories leads to the mathematical field of combinatorics.

A single card is dealt from a standard deck of 52 playing cards. What is the probability that the card will be an ace, a king, a queen or a jack?

We could perform this experiment, say, $50$50 times in the classroom to discover the relative frequency of the required event. (Note that the occurrence of any one of the four listed outcomes would mean the event has occurred.) A more accurate estimate of the relative frequency would be obtained if we performed the experiment, say, $1000000$1000000 times with a computer simulation.

Visual representations of an experimental situation can help in counting the possible outcomes or their relative frequencies. A tree diagram may clarify complicated multi-stage problems.

In a certain game of chance, a player has been observed to win five out of every nine games. In a particular tournament, three rounds are to be played. What are the outcomes and what are the probabilities for each outcome?

There are three stages and two outcomes at each stage - win, lose. 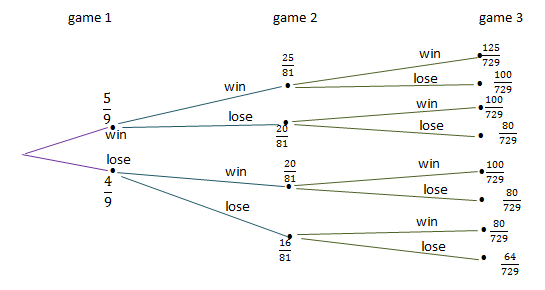 By reading along the branches of the tree, we see that there are eight outcomes:

Another visual display that can help in probability questions is the Venn diagram. 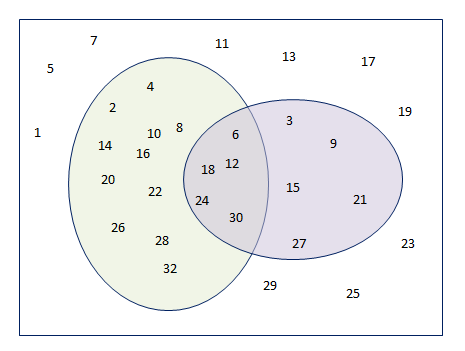 When a numerical result is associated with each outcome of an experiment, we can calculate a mathematical expectation.

A die is rolled $60$60 times and the results are recorded in the following table:

What is the probability of picking a red card out of a deck of cards?

A fair die is rolled and then a coin is tossed.

Given the following options: