The sample space, sometimes called an event space, is a listing of all the possible outcomes that could arise from an experiment.

Did you also notice how I listed the sample space? Using curly brackets { }.

An event is the word used to describe a single result from within the sample space.  It helps us to identify which of the sample space outcomes we might be interested in.

For example, these are all events.

We use the notation, P(event) to describe the probability of particular events.

Adding up how many times an event occurred during an experiment gives us the frequency of that event.

The relative frequency is how often the event occurs compared to all possible events and is also known as the probability of that event occurring.

The probability values that events can take on range between 0 (impossible) and 1 (certain).

We can calculate probabilities by constructing a fraction like this: $\frac{\text{what you want}}{\text{total }}$what you wanttotal ​ which we write more formally as

An expected outcomes, as the name suggests, is the value (probability value) we expect from a given sample space or a set of given individual event probabilities. 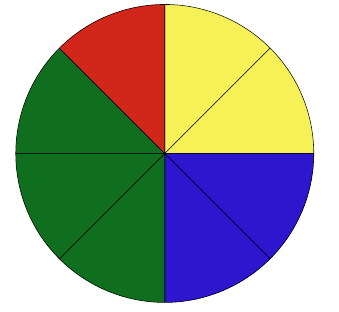