In right-angled triangle trigonometry, we can only deal with angles whose sizes are between $0^\circ$0° and $90^\circ$90°. In the chapter on Angles of Any Magnitude, it is explained how the sine, cosine and tangent functions are given a more general definition so that they can be applied to angles that are impossible in right-angled triangle trigonometry. The functions are defined in terms of the coordinates of a point that is free to move on the unit circle, in the following way.

The radius, drawn to the point on the circle, makes an angle with the positive horizontal axis. By convention, the angle is measured anticlockwise from the axis. It can have any real value, positive or negative. 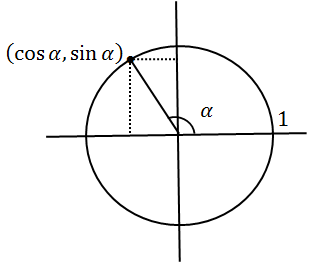 By considering the coordinates of a point as it moves around the unit circle, we see that the sine and cosine functions have either a positive or a negative sign depending on which quadrant the angle is in. The signs depend on the signs of the coordinates involved.

Have a look at the following applet, you can make settings for degrees or radians, and whether you want to rotate positively (anticlockwise) or negatively (clockwise). As you explore, see if you can determine where sine, cosine and tangent are positive or negative.

These can be remembered by having a mental picture of the unit circle diagram or by means of the mnemonic ASTC: 'All Stations To Central: All-Sine-Tangent-Cosine' that shows which functions are positive in each quadrant. These facts become important when trigonometric equations are being solved for all the solutions within a given range. 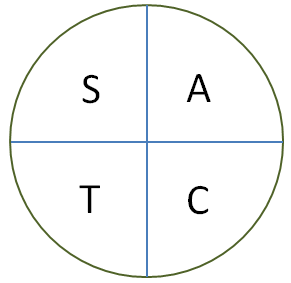 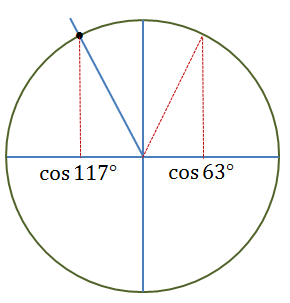 Express the sine, cosine and tangent functions of the angle $512^\circ$512° in terms of an angle in the first quadrant written in radian form.

Which of the ratios listed have positive values?

Which of the following will have positive answers? Select all correct answers.

For each of the following, rewrite the expression as the trigonometric ratio of a positive acute angle.

You do not need to evaluate the trigonometric ratio.