There are many techniques for factorising quadratics, these are covered in the factorisation section. We can factorise by:

Recall that if we have two factors, like $a$a and $b$b, and we multiply them together so that they equal $0$0, then one of those factors ($a$a or $b$b) must be $0$0. A written solution to a question like this would be similar to the following:

Now, let's see why this is so useful when graphing quadratics.

So finding the $x$x-intercepts is the same as solving the quadratic. Refer to the lesson on Physical characteristics of solving an equation for more detail. As we saw when Solving by Factorising, once fully factorised, we set each factor to zero and solve to get the values of the zeros. These values correspond to the x-coordinates of the x-intercepts of the graph of the quadratic function.

Do: Set each factor to zero, so either

The vertex always occurs midway between the two roots, and lies on the axis of symmetry.

Now remember that this is only the $x$x-coordinate of the vertex. We still need to substitute this value into the quadratic to get the $y$y-coordinate: 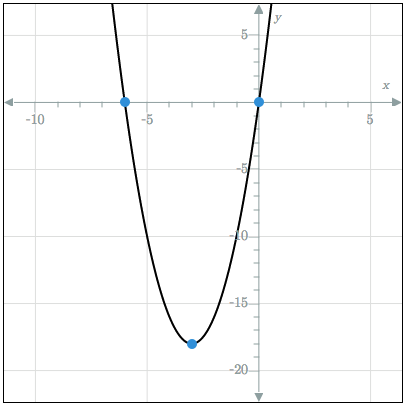