Use various methods to solve linear systems in 2 unknowns

So far we've had a look at what simultaneous equations are and at some of the ways to solve them.  Here is a quick recap.

As with all algebraic expressions, simultaneous equations can also be expressed as graphs on a number plane. In coordinate geometry, we know that each graph represents ALL the possible solutions of a related equation. In other words, if a point is on a graph, it must solve its equation. In simultaneous equations, we mostly deal with linear equations, which can be represented as straight line graphs. Our aim is then to find a solution that solves BOTH equations, and graphically this means finding the point of intersection of the two straight lines. 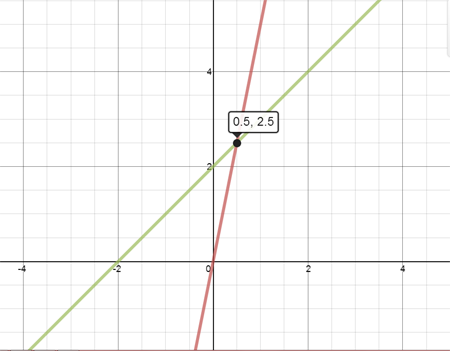 Simultaneous equations are easy to solve if we know how to graph them, but that takes a long time and sometimes we need a faster way. One efficient way to solve them is called the substitution method. As the simultaneous equations we usually work with involve $2$2 variables and $2$2 equations, this method works by solving one variable first through 'substituting' one equation into the other.

The elimination method works by adding or subtracting equations (yes you can do that!) to eliminate one variable so that we only have one variable to solve at a time.

Now we know how to eliminate variables from a system of simultaneous equations by adding or subtracting.

When we don't have the same value coefficients for the variables we want to eliminate, we can multiply or divide the whole equation by a constant until it gets to the coefficient that we want.

Multiplying the first equation by $2$2:

Now let's find the difference of this new equation and Equation 2:

c) Graph the two equations on the same number plane.

Use the substitution method to solve for $p$p and $q$q.

Think: What's the easiest way to to make the coefficients of the $y$y terms be the same value, of equal or opposite sign?

Let's name this Equation 3. Now that the coefficients of $y$y in Equations 1 & 3 are equal in value and sign, let's subtract one from the other. Let's try Equation 3 take away Equation 1:

Think: Which of the $3$3 equations we have would be easiest to derive $y$y from, if we have $x$x?

Equation 2 seems the most simple so let's substitute our $x$x value in there:

Subbing in our $x$x and $y$y values into our original equations:

Use the elimination method by subtraction to solve for $x$x and then $y$y.

Based on the diagram given, find the value of $x$x and $y$y.