Applications of Similarity and Symmetry

Similar triangles in the real world

Similar triangles show up everywhere in the real world, even when you can't see them. We can use what we've learnt about similar triangles to figure out distances and angles when they might be too large to just measure with a ruler or compass.

There are 5 steps to any problem involving similar triangles.

A very common kind of similar triangles problem involves shadows being cast over straight objects. If two objects are in roughly the same place on the earth, the sun's rays will pass over the top of them at the same angle. Suppose we are given the following problem.

After we have read the question and understood the information, we can construct a diagram to help us solve the problem. We will call the unknown height of the tree $h$h.

We can tell that these two triangles must be similar because they are both right angled and have equal corresponding angles where the sun's rays come down.

Since the triangles are similar, these both pairs of corresponding sides will be in the same proportion. Hence, we can form the following equation relating the ratios.

We then solve for $h$h as follows.

Another common similar triangles problem involves figuring out horizontal distances on the earth. Suppose we are given the following problem.

Paula wants to figure out the width of a river. She stands $4$4 m from the south bank, looking across at two trees on the north bank that are known to be $38$38 m apart. Her assistant stands on the south bank, stands in between Paula and the first tree, and places a stick in the ground. The assistant then walks $8.4$8.4 m across the bank and stands in between Paula and the second tree, placing a stick in the ground again. Find the width of the river, rounding your answer to the nearest centimetre.

Again, we construct a diagram and label the relevant information. We can call the unknown width of the river $w$w.

We can tell that these triangles are similar because one is nestled inside the other and the river banks are parallel.

Neither triangle is a reflection or rotation of the other, so the corresponding sides are easy to see. The river banks represent corresponding sides, and Paula's distance of $4$4 m from the south bank corresponds with her total distance from the first tree directly across the river, which is $w+4$w+4 m.

Again, since the triangles are similar, these both pairs of corresponding sides will be in the same proportion. Hence, we can form the following equation relating the ratios.

We then solve for $w$w as follows.

Paper usually comes in eleven standard $A$A series sizes starting at the largest, $A0$A0, through to the smallest, $A10$A10.

Each new size is obtained by cutting the previous one in half, as shown below. 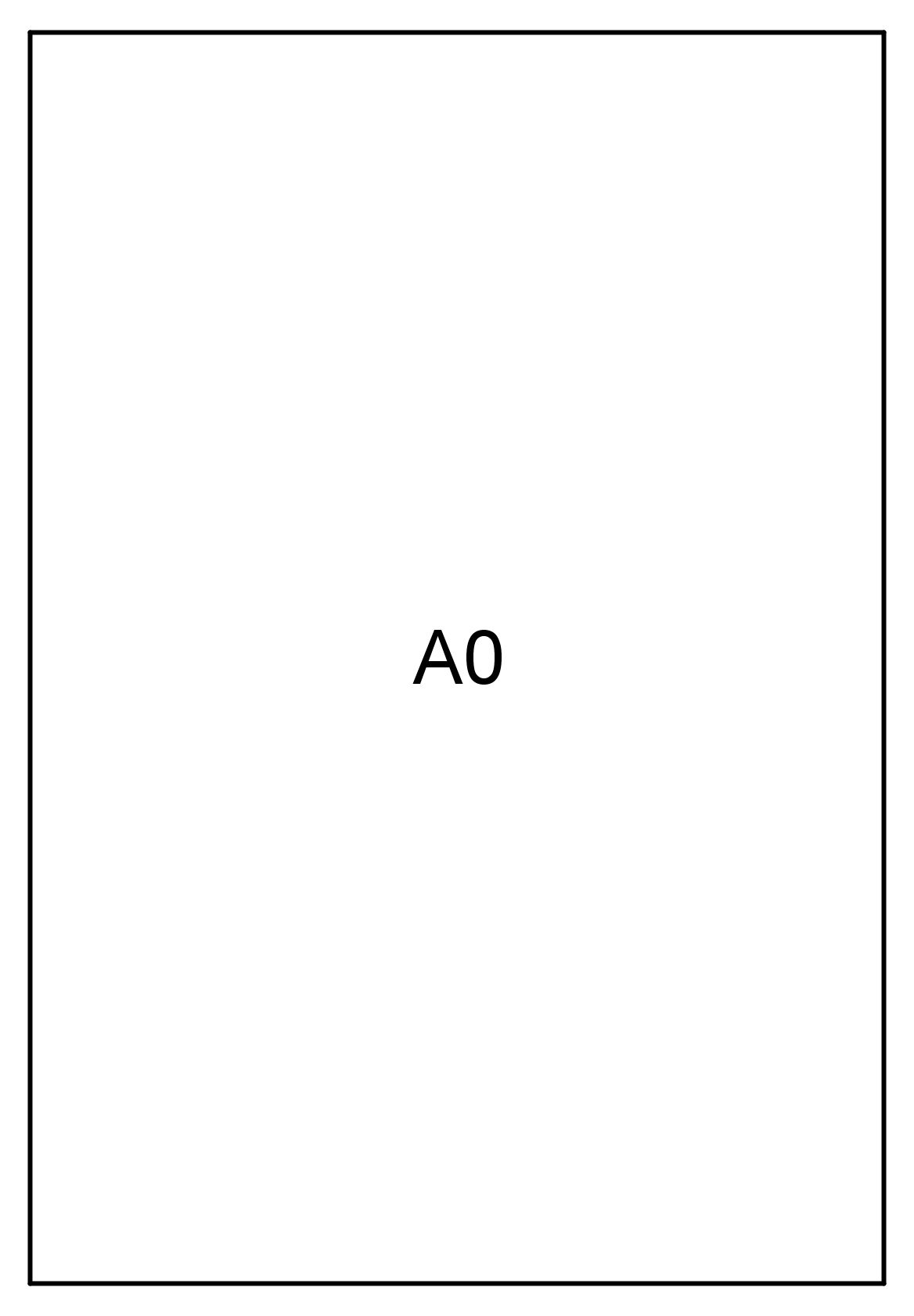 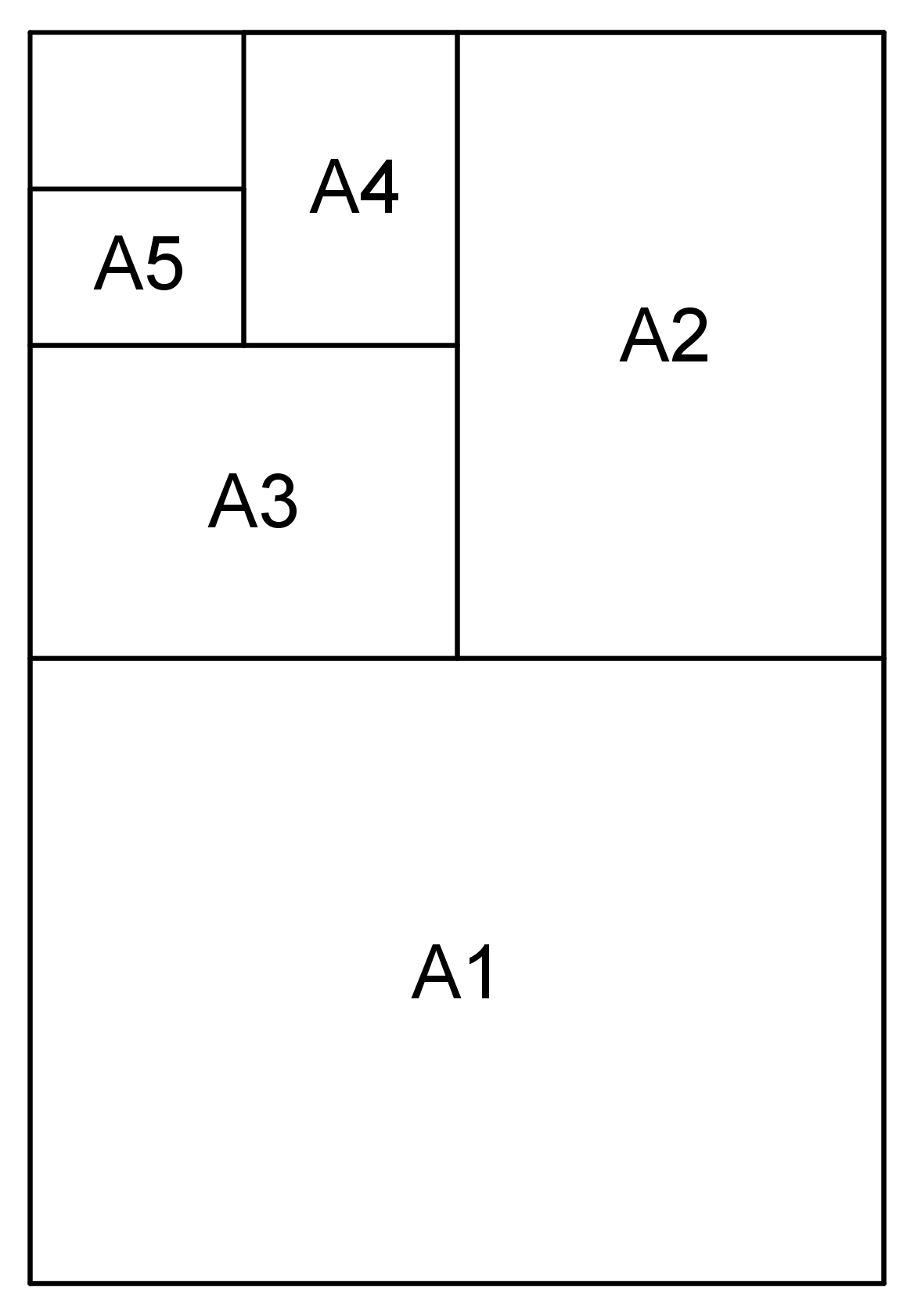 i) What area should Serena's $A7$A7 cut-out have? Express your answer in cm2.

b) $A$A Series paper uses this simple halving method to reduce waste but still manages to keep all sheets in the same rectangular proportion.

What must the ratio of the sides be in order for this to happen?

a) i) Since each new sized sheet is just half the area of the previous sheet, we just have to keep halving $1$1 m2 until we arrive at the area for an $A7$A7 sheet.

Notice the pattern. We have to divide by $2$2 $n$n times for the area of an $An$An sheet of paper. Hence we can calculate our area for an $A7$A7 sheet by dividing by $2$2 seven times..

Firstly, we are halving the sheets as in the diagram, so we have the following:

Secondly, we want the rectangles to all be similar, so we have the following:

Which we can then rearrange to get:

Which we can rearrange to get:

Hence, we have the following perimeter for the $A7$A7 sheet: