Constructions with a compass (Investigation)

Tools of the trade

Every profession has particular tools that they use all the time, a chef has their knives, the sewer a machine and the mathematician, well they have their construction tools.

No, not hammers and hard hats - Mathematicians use a compass, pencil and a straight edge. 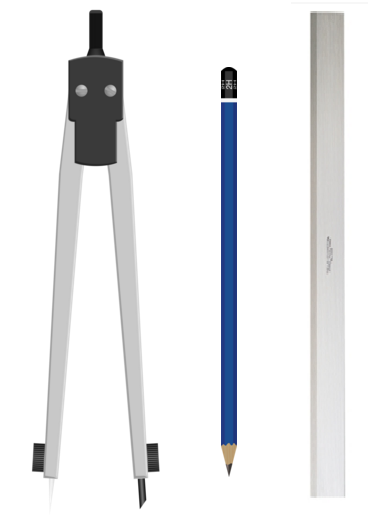 From just these three things we can create (nearly) all of what we require in geometry.

Notice how I used the word straight edge and not ruler.  Well that's because all we really need for the constructions is a straight edge, we often don't even need numbers!

This page will take you now through a series of basic constructions.

We have another page on more intermediate constructions, there we will cover the following.

If you want to jump right in here, then go to the intermediate page.

To construct congruent line segments you need a compass and a straight edge (ruler).

To construct congruent angles you need a compass and a straight edge (ruler).

In geometrical constructions, bisect means "cut in half".  So to bisect a line segment means to cut the line segment in half, or find the halfway point.

To bisect a line segment you will need a compass and a straight edge (ruler).

In fact this is a very special line, it is called a perpendicular bisector which means it not only cuts the line in half, but the line is perpendicular to the segment, (at right angles to it).

Another way to construct perpendicular lines.

The following are three challenges for you to try.  They use the skills we have just explored:

Start by considering the special properties that relate to these objects and then have a go at creating them.