A solid 3-dimensional circular object is a sphere.  Its surface is defined as the collection of points that are all equidistant from a central point (centre of the sphere).  Half of a sphere is called a hemisphere.

Unlike solids we have seen so far, we cannot unwrap a sphere, get a 2D net and calculate its area.  So the surface area of a sphere is approached in a different way.  Archimedes discovered that a cylinder that circumscribes a sphere, as shown in this picture, has a curved surface area equal to the surface area, S, of the sphere. 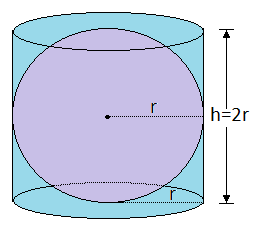 Surface Area of a Sphere

Here is a detailed explanation of the proof

Find the surface area of the sphere shown.

Consider the following hemisphere with a radius of $8$8. Find the total surface area.