Column and bar graphs are used to display, interpret and compare categories of data that have been counted. Bar graphs can run vertically or horizontally, but column graphs only run vertically. We can compare more than one set of data on one graph, using different colours.

We use ticks to represent the numbers between the main number points, as seen below: 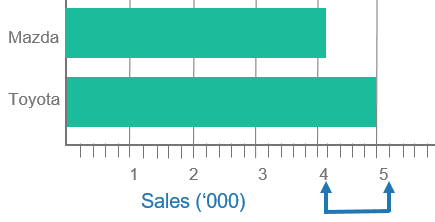 Let's think about how we read this graph:

The table below shows the house points earned by four colour houses at their swimming carnival.

The sales of different products are shown in the following horizontal bar graph.

Study the bar graph below which shows the changes in tourism rates in different cities during 2011 and 2012, then answer the following questions.