The word polygon comes from the Greek poly - meaning many and gonos - meaning angles.  So a polygon is a many angled figure.

With many angles comes many sides, in fact every 2D straight sided shape has the same number of angles as sides.

Different sided figures have names that describe the number of the angles and sides. 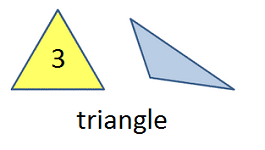 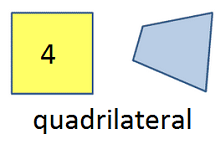 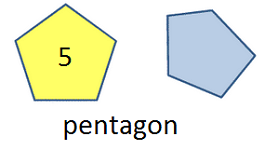 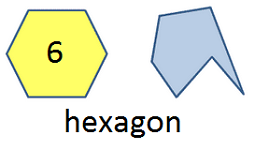 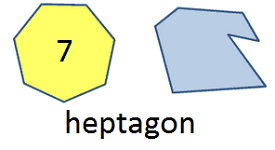 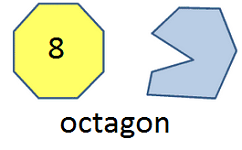 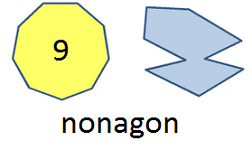 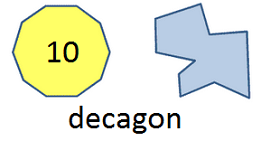 Other shapes that may not be as common are

2D shapes can be classified as being either regular or irregular.

A regular polygon has all sides (and angles) equal length and size.

These are all regular polygons.

An irregular polygon has some sides (and angles) of different lengths and sizes.

These are all irregular polygons.

All 2D shapes can be classified as either concave or convex.

Lets have a look at CONVEX shapes first.

Here are some pictures of CONCAVE shapes.

Can you see what the difference is? Could you describe it?

Some people say that concave figures are just funny looking! Others describe them as having a cave like shape to them.

Mathematicians however would not be happy with defining a shape as being funny looking, so instead they define it like this.

A convex shape can be identified through two possible key elements

If the shape has a caved in side we call it concave.  Formally we define a concave shape as when the line that connects $2$2 neighbouring vertices projects into the inside of the shape.  Another way to tell if a shape is convex or concave is to look at the value of the interior angles.  If all interior angles are less than $180^\circ$180° then the shape is convex.  If the shape has at least 1 angle greater than $180^\circ$180° then it is concave.

Have a play with the interactive below, create convex polygons and concave polygons by moving the blue points. Note the line extensions and angles as discussed above.