A proof of Pythagoras' Theorem (Investigation)

The study of mathematics is like a huge pyramid, with things which are proven forming the base of more complicated work above it. The great thing about math is that once someone has proven something, you can take it as completely true and never have to doubt its validity, and so you can use them without worrying whether they are really true or not. Unlike science, where things which are widely believed can occasionally be proven wrong, in mathematics once something has been proven properly, it is perfectly and completely true forever.

For example, in your addition you often use the fact that $1+1=2$1+1=2. Without this fact none of your addition would make sense, and you wouldn't even be able to begin learning your multiplication facts.

No, holding up one finger and another finger does not count as a proof. In fact, mathematicians have managed to prove that $1+1=2$1+1=2 properly. In Bertrand Russel's Principia Mathematica, he took 362 pages of advanced mathematics to finally prove it! The end of this proof is shown below:

Although some proofs are extremely complicated, like this one, others are simple and intuitive. We're going to have a look at one of these, the proof for Pythagoras' theorem. You have probably already memorised the theorem, which looks something like this:

The proof for this is fairly simple, and you can even prove it yourself using a piece of paper and a pair of scissors: 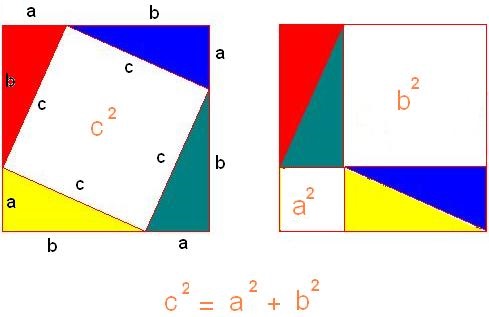 As you can see, the proof is fairly simple, you do not need to be a genius to figure it out. So why did Pythagoras' get so famous for proving it this way? Well, it turns out that Pythagoras was not the first one to "discover" Pythagoras' theorem, as people had already known that $a^2+b^2=c^2$a2+b2=c2 for a very long time.

For example, the Babylonians were aware of this relationship at least $1000$1000 years before Pythagoras, and it was discovered independently by the Chinese (where some call it the "Shang Gao Theorem") and Indians. However, the reason that it is called "Pythagoras' theorem" is that he is said to have been the first to prove it, using something like the proof above. In mathematics, simply discovering that something is true is not enough, it is the process of proving it rigorously which is the most important. Just like a solid stone in a pyramid, a proof allows other mathematics to be built on top of it, without ever doubting the foundations below.