It can happen that a variable $y$y is known to be a function of $x$x but we do not have an explicit definition of the function. Instead, we have an equation that is satisfied by $x$x and a function $y$y of $x$x. Often, there may be more than one function $y$y that satisfies the equation.

In many cases, it is difficult or impossible to solve an equation in $x$x and $y$y to give $y$y as a function of $x$x explicitly. Yet, we may be convinced that such a function exists and that it is differentiable.

We can differentiate term-by-term using the product rule and the fact that the derivative of $y$y (which we assume to be an implicitly defined differentiable function of $x$x) is just $\frac{\mathrm{d}y}{\mathrm{d}x}.$dydx​.

On re-arranging, we find $\frac{\mathrm{d}y}{\mathrm{d}x}=-\frac{x}{y}$dydx​=−xy​, provided $y\ne0.$y≠0.  (The derivative is undefined at the end-points of the semicircles where the tangents are verticle.)

In this example, it is possible to discover the explicit functions that satisfy the equation. We assume $y$y can be given as one or more functions of $x$x. Using the quadratic formula, 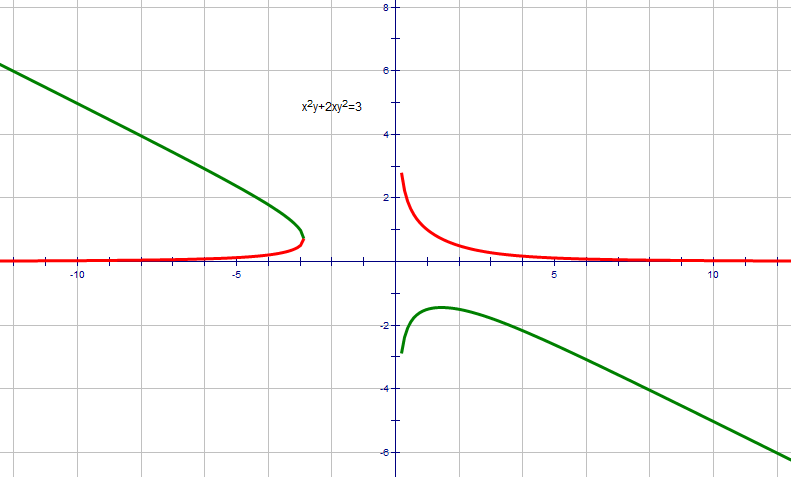 Choose and apply a variety of differentiation, integration, and antidifferentiation techniques to functions and relations, using both analytical and numerical methods