For example, suppose a great many components produced by a machine are measured. All the components should be identical but it is found that there is some variation in the measurements and a frequency histogram of the measurements shows the characteristic normal curve shape. From the data, it is found that the mean is $\mu$μ and the standard deviation is $\sigma$σ. (We are using symbols rather than particular numbers to make the argument general.) We would say that the data has the $N(\mu,\sigma)$N(μ,σ) distribution: normal with mean $\mu$μ and standard deviation $\sigma$σ.

We wish to rescale the data set so that it has the $N(0,1)$N(0,1) distribution. To do this we first subtract $\mu$μ from each of the data values. After this transformation, the data will have mean $0$0. Next, we divide each data value by $\sigma$σ. This operation causes the transformed data to have the standard deviation $1$1.

Verify, using previously established facts about linear transformations of random variables, that the standardisation operation described above is consistent with earlier work.

Let $X$X be a random variable with mean $\mu$μ and variance $\sigma^2$σ2. We wish to know the mean and standard deviation of the transformed random variable $Y=\frac{X-\mu}{\sigma}$Y=X−μσ​.

The mean of $X$X is expressed as the expected value $E(X)$E(X). From previous work, we know that

Only the positive numbers of standard deviations need be shown in the table because the distribution is symmetrical. (Half of the probability is on the positive side and half on the negative.)

Since the required quality control limits are wider than this range, we conclude that the machine is operating satisfactorily and there will be fewer than $1%$1% rejected components. 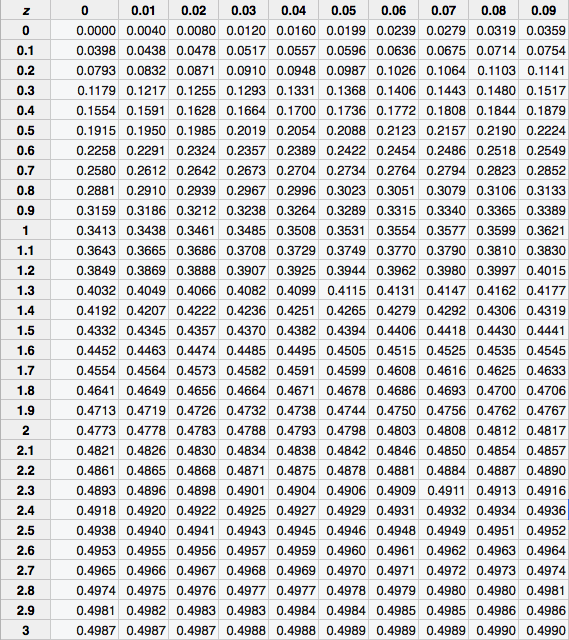 Give your answer as a percentage to two decimal places.