The idea of amplitude does not apply to the tangent function because there is no maximum or minimum value. However, a similar idea of dilation in the vertical direction does apply. In the following diagrams, the graphs of $\frac{2}{7}\tan x$27​tanx, $\tan x$tanx, and $3\tan x$3tanx are displayed on the same set of axes to illustrate the effect of increasing the coefficient that multiplies the function.

The steepness of the curve near the origin increases as the coefficient increases, indicating a stretch in the vertical direction.

Determine the coefficient $a$a for the following tangent curve (the one shown in black).

Consider the right-angled triangle shown below, where the length of $OB$OB is $1$1 unit and the angle $x$x is measured in radians. 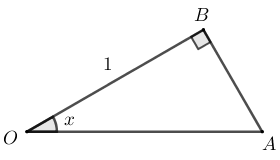