In more general contexts, there are some things about inverse functions that must be treated with care.

The broad idea of an inverse function is that while a function maps each element $x$x in its domain to an element $y$y in its range, the inverse function reverses the process by mapping each $y$y back to the original $x$x.

This will only work if each $y$y in the range is the image of exactly one $x$x from the domain. Take for example the squaring function $y(x)=x^2$y(x)=x2 with its domain the real numbers. The number $9$9 is an element of the range but both $-3$−3 and $3$3 in the domain have this same number as their image. Therefore, we cannot know which was the original $x$x.

A more extreme example of a function that has no inverse is the constant function, $y(x)=k$y(x)=k for all real numbers $x$x. Whatever number $x$x we choose to start from, the function maps it to $k$k. If we are only given that the function value is $k$k, there is no way to tell which $x$x it came from. Hence, there can be no inverse function.

The so-called horizontal line test is used with graphical representations of a function to decide whether a function can have an inverse. If there exists a horizontal line that cuts the graph in more than one place, at least two elements of the domain have the same image under the function and there can be no inverse. 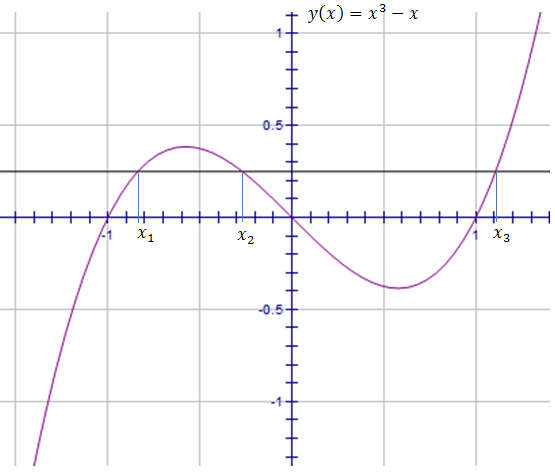 Functions that do have inverses are those that are something like a linear function, always increasing or always decreasing. In this situation, each element of the range is the image of exactly one domain element and so the inverse mapping is possible. Functions of this kind are called one-to-one functions.

We can often get around the problem of a function not being one-to-one and therefore having no inverse, by restricting the domain of the function. In the graph sketched above, we see that the function is decreasing in the central part of its domain between $-\frac{1}{\sqrt{3}}$−1√3​ and $\frac{1}{\sqrt{3}}$1√3​ so that if we only considered this part of the domain there would be no ambiguity about inverse mappings. The same function with the restricted domain is shown below. 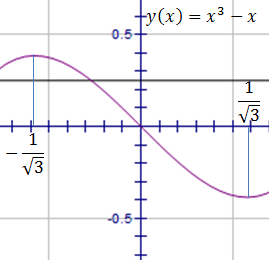 In the case of the trigonometric functions, the horizontal line test indicates that none of the functions on its natural domain has an inverse. We deal with this problem by restricting the domains of the functions to regions over which the functions are one-to-one.

The notation $\tan^{-1}$tan−1 is used on calculators for the inverse tangent function, arctan.